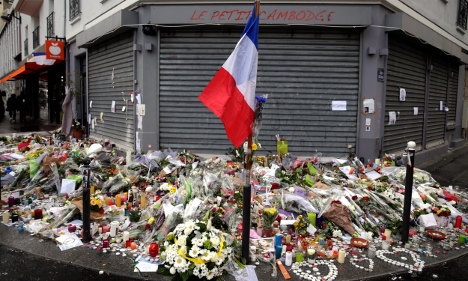 The Petit Cambodge restaurant, which was targeted in the terror attacks in Paris in November. Photo: AFP
Belgian police have found three handmade belts “that might be used to transport explosives”, traces of explosives and a fingerprint of fugitive Paris attacks suspect Salah Abdeslam at a flat in Brussels, prosecutors said on Friday.
Inside the flat, in the northern Brussels district of Shaerbeek, were traces of acetone peroxide (also known as TATP), a crystalline powder that can be used to make explosives.
“In the framework of the investigation opened after the Paris attacks the federal prosecutor confirms that during a house search conducted December 10th in an apartment on the third floor, Rue Bergé in Schaerbeek, material that can be used to fabricate explosives as well as traces of TATP were found,” the prosecutor said.
“This apartment was rented under a false identity that might have been used by a person already in custody in this case,” the statement added.
All seven terrorists who died in the Paris attacks were wearing suicide bombs.
Fingerprint found
The Brussels flat is also understood to have been a hideout used by prime suspect Salah Abdeslam shortly after the November 13th attacks.

Wanted suspected terrorist Salah Abdeslam. Photo: Police nationale
Police reportedly found one of his fingerprints inside the flat.
Abdeslam, 26, has been one of the most wanted men in Europe since the attacks, after he was able to return to Belgium after the Paris attacks, passing three police controls along the way.
The man who was renting the Brussels flat remains in police custody.
The Paris terror attacks saw seven terrorists die, all of whom were wearing suicide bombs.
Federal prosecutors spokesman Eric Van Der Sypt said however that it was not clear when Abdeslam visited the Brussels apartment.
“We found the fingerprint but we have no idea when it was left — a fingerprint has no date or time on it,” Van Der Sypt told AFP.
“Maybe he went there to get his belt (before the attacks), and maybe he went back afterwards. I suppose it's a possibility of both,” he added.