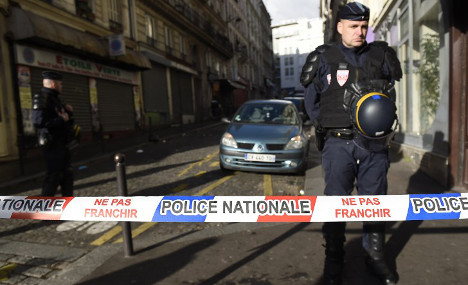 The attacker, who was shot dead by police on Thursday outside the police station on rue de la Goutte d’Or in the 18th arrondissement of Paris, has not been named publicly by authorities.

However numerous sources close to the investigation said police matched the man's fingerprints with those on file for the convicted thief, a homeless man who identified himself at the time as Ali Sallah, born in the Moroccan city of Casablanca in 1995.

Authorities are now trying to determine whether this is the man’s true identity, however France's chief prosecutor said on Friday that the identity was “not at all certain”.

“This identity (he gave in 2013) is contradicted by a hand-written note that we found in his clothes,” Molins told France Inter radio. “He is not known to the intelligence services under this name.”

The note, which included a hand-drawn flag of the Islamic State group (IS), gave a different name which Molins did not reveal. It also said his nationality was Tunisian instead of Moroccan.

On Friday BFM TV published an image they said was Ali Sallah, though this has not been confirmed by authorities. His was convicted in 2013 for “group robbery” linked to an incident in the town of southern town Saint-Maxime in the Var département.

Some reports say the man, who had no formal identification papers, had been ordered to leave French territory following that conviction.

Investigators have told L’Express news site that man was not living on the streets in Paris and may have been staying with friends.

On Thursday it was revealed the suspect, who had been wearing a fake suicide belt, was also carrying the emblem of Isis printed out on paper as well as a written claim for the attack in which he said he wanted to avenge the deaths in Syria. Prosecutors also said he shouted “Allahu Akbar” (meaning “God is greatest” in Arabic) as he tried to get into the police station.

France’s Justice Minister Christiane Taubira however said the man was not known to intelligence services and had no link to violent radicalisation.

Police sources however say they have no reason yet to believe this to be the case.

A mobile phone was also found on the man, which contained messages in both German and Arabic, BFM TV reported.

There was a certain amount of anger among locals in the mainly immigrant Goutte d'Or area following the shooting.

Many refused to believe the police version of events, with several witnesses disputing the fact he shouted “Allahu Akbar” at police.

Others believe officers could have neutralised the man by shooting him in the legs and spared his life.