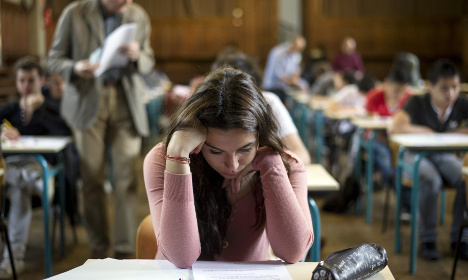 Photo: AFP
If a French person writes on their CV that they can speak English, there's a ten percent chance they're exaggerating their skills.
Indeed, only four percent of the country's population can actually speak “fluent English”, according to a new survey carried out by language school ABA English.
Fluency, as defined by ABA English, is being able to “easily converse” with someone in English.
The language company interviewed 1,200 French people and found that 55 percent of respondents claim to have an “intermediate level” of English. A further 41 percent said they only have a very basic knowledge, or don't speak it at all.
And the French are seeing some serious ramifications on the job front as a result.
Indeed, 23 percent of respondents said that they believe they missed out on a job opportunity due to their poor English skills.
“Having a good level of English isn't considered as a 'plus' in the French job market anymore, it's a 'must',” the company said.
It added that speaking English opened doors in an ever shrinking world, but that fewer than ten percent of French people have an 'advanced' level of English – the level required by the vast majority of small, medium, and large firms in order to get an international management position.
Stephen Wragg, the managing director of the French-based Business and Technical Languages (BTL) school, says that despite the poor figures, he's noticed a changing tide.
“In the last ten, 15 years there has been a definite increase in skill level of the people that we teach,” he told The Local.
“It's the new generation of people coming though, they've come a long way since (former French president) Mitterand frowned upon the use of words like 'le weekend'.”
He added that he wasn't surprised about the CV “lies” – but blamed it more on the fact there isn't a standardised system of labelling language ability.
“Some people apply for jobs saying they speak 'anglais scolaire' – what on earth does that even mean. There is a tendency for French people to hide behind vague terms, and I think the best solution is to go and get properly tested.” Photo: Shane Global/Flickr
The study found that of those currently studying English, 48 percent say they're doing it for professional reasons, 23 percent want to be able to make the most out of travel, while 20 percent are doing it as part of their education.
And that the biggest reason French people chose not to better their English was due to a lack of free time, or at least that was the excuse given by 64 percent of respondents.
But perhaps finding the time should be made a priority, not least considering the reputation of French people when it comes to speaking “anglais” has been miserable in recent studies.
Late last year, the French were ranked bottom of the class in the EU for their level of English, and only slightly ahead of Turkey and Azerbaijan. The study, carried out by international language training company Education First, ranked France with a “low proficiency” overall.
The list, as usual, was dominated by the Nordics. Sweden finished first, followed by the Netherlands, Denmark, Norway, and Finland.
There are a host of speculations as to why French people speak such poor English. Experts have pointed the finger at everything from dubbed TV to boring and theory-heavy classes at school, not to mention a serious lack of confidence when it comes to actually speaking.
Peter Gumbel, a Paris-based author of a best-selling critique of the French school system, says that there is also a desperation for French people to cling to their own language and culture.
“There's a whole policy of “francophonie”. If you use an English word in a billboard ad, you have to put an asterisk and translate it. The Academie Française thinks English is worse than the plague, and still tries to eradicate it where it can,” he told The Local recently.
READ ALSO: Here's how the French can improve in English