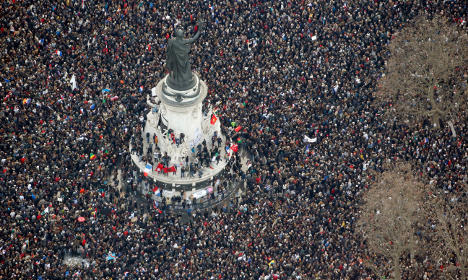 Days after the January attacks, the streets were filled for a march of solidarity. Photo: AFP
Terrorists killed 17 people in a three-day spree beginning on January 7th last year. Their main target was the office of the satirical newspaper Charlie Hebdo, where they killed 11 people.
Four members of the Jewish community were killed in a shooting at a supermarket in eastern Paris and two on-duty police officers were also killed, one near Charlie Hebdo's offices, the other in the suburb of Montrouge.
“The three days that changed France” was how many media in France summed up the blood shed that only ended when police killed the three terrorist gunmen in separate but coordinated raids.
Here's how France has changed.
More soldiers and police on the street This is perhaps the most noticeable change, especially for anyone who has visited or lives in Paris, because it's one that French people and especially Parisians are confronted with each day. Ever since the attacks, there have been guards outside sensitive areas like places of worship and faith schools. Popular tourist attractions like the Eiffel Tower are also heavily guarded.
Parisians rarely bat an eyelid any more at seeing heavily armed soldiers – dressed in camouflage – walking through a Metro station or along a busy street.
The presence has increased even further since the November attacks.
Intolerance and racism on the rise

There has been a huge jump in the number of anti-Semitic and Islamophobic acts in France since the January attacks.
More than 400 hate crimes were recorded against France's Muslim community in 2015, three times as many as the 133 reported the year before. The Jewish community reported around twice as many incidents from January to May last year than the year before, 508 compared with 276.
And it's not just attacks, according to Marc Ayache, a 26-year-old mechanical engineer, who told The Local he has felt a more subtle form of discrimination.
“The biggest change for me has been that I am suddenly a bi-national. I completely share the values of France. I'm about to marry a French girl. But I lived in Lebanon for the first two years of my life so I'm not considered 'pure' anymore,” he told The Local on Thursday.
“People are putting me in some 'second category' which I'd never seen before. It's very confusing.”
He said he was “shocked” by this “fear of foreigners” reflected in the recent regional elections, where the far-right anti-immigrant National Front pulled in a total of 6.8 million votes.
New sense of vulnerability The January attacks saw Paris as a city lose its innocence and since then few doubted that such an act of terrorism could happen again. And not just in Paris but France as a whole.
This was tragically proven true in November, when terrorists fired indiscriminately into crowds of people in bars and concert halls across Paris, killing 130. And as recently as Thursday, what may have been another attempted terror attack was stopped when police shot a knife-wielding man dead in northern Paris.
There have also been numerous other incidents, with a jihadist beheading his own boss near Lyon, another man attacking soldiers in Nice, a foiled attack on a train and numerous other plots foiled including one on the central city of Orleans.
While there has been a common feeling among Parisians that life must continue as normal, everyone is aware of the possibility for more copy-cat attacks, not least thanks to daily reminders like soldiers on the street.
“People are stressed out and tired,” Louise, a 23-year-old student, told The Local on Thursday.
“It's difficult for me to accept that France has become part of all this now – it's not just something that happens in foreign countries anymore. We have to be engaged too.”
But at the same time the city's locals have developed a sense of defiance.
“Carrying on with our normal life is a political act. And me, I've made a point of keeping  life exactly the same,” Maggie, an American who has lived in Paris for several years, told The Local.
Hollande turns into a war leader A huge change in the political landscape came courtesy of President Francois Hollande.
Before the attacks, his popularity levels had been nosediving with many saying he lacked direction and was too indecisive in trying to rescue the country's flagging economy. Indeed, he had been nicknamed “Flanby” – a wobbly dessert popular in France.
But the indecisiveness seems to have disappeared after the January attacks. Hollande has almost been on a war footing as he rallied the nation soon after the attacks – uniting world leaders in Paris for an unprecedented march.
His handling of the January attacks was commended and saw his popularity rise. With the ongoing threat and the November attacks, Hollande has reinvented himself as the great protector of the French nation and hasn't stopped reminding the public that France is “at war”.
Just as Hollande took a lurch to the right on economic policy he was also lampooned for wading into far right National Front territory with his plan to strip dual nationals of the French citizenship if they are convicted of terrorist offences.
All in all, François Hollande is a far different president than the one who stumbled through his first year in power.
Civil liberties take a hit Following the attacks in January the French government realized they were well behind other countries when it came to the powers available to their intelligence services.
They quickly made up for that by passing a new law that greatly improved their powers of surveillance.
The new laws allow authorities to spy on the digital and mobile communications of anyone linked to a “terrorist” inquiry without prior authorization from a judge, and force Internet service providers and phone companies to give up data upon request.

Intelligence services will have the right to place cameras and recording devices in private dwellings and install “keylogger” devices that record every key stroke on a targeted computer in real time.

Amnesty International and other civil liberties groups were protested against the legislation, warning it would take France “a step closer to a surveillance state”. As France was plunged into soul searching by the attack on Charlie Hebdo, one of the conclusions the government came to was that France's principle of secularism needed to be reinforced.

President François Hollande announced that a National Secularism Day would be celebrated in all schools as part of a ten-point plan to combat radicalization by educating young people about the significance of “Laicité” in France.

And France's National Observatory on Secularism has been asked to intervene in numerous disputes in schools since the attacks and not without controversy.

More towns have tried to ban replacements for pork dinners in the name of secularism and one Muslim girl was even sent home from her school because her long, black skirt was deemed to be a “conspicuous” sign of Islam.

The Charlie Hebdo massacre and the outpouring of anger and grief placed France's Muslim leaders under great pressure.

Many called on them to condemn the attacks but also do more to fight extremists, especially in certain mosques where radicals were considered to have taken over.

More than ever people were asking the question of whether Islam was really compatible with French values.

As a result some Muslim groups and Imams have seized the initiative. The sight of Imams singing the Marseillaise in Place de la Republic after the November attacks was hugely symbolic and a sign they realized they have to act.

This weekend mosques around the country will open their doors to members of the public who are invited in to listen to prayers and meet worshipers.