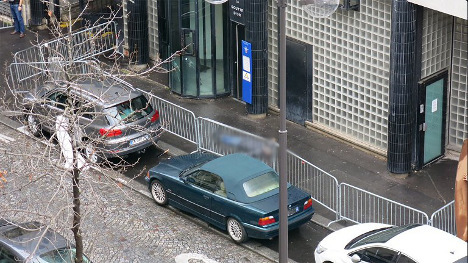 The body of the man killed by police lies on the pavement. Photo: AFP

At around 11:30am, exactly the time that one year ago the Kouachi brothers opened fire at Charlie Hebdo's offices, a man wearing a coat approached the police station on Rue de la Goutte d'Or in the 18th arrondissement in Paris.

According to prosecutors the man approached the police standing guard at the entrance to the station and pulled out a meat cleaver threatening the officers.

According to prosecutors the man also shouted the words “Allahu Akbar” (God is Greatest) at police, however several witnesses who spoke to French media have disputed this claim.

French prosecutors also said the man was wearing what appeared to be an explosives vest although it was later found to be a fake.

A source close to the investigation told AFP.He was “wearing a pouch under his coat with a wire hanging from it, but the device “contained no explosives”.

Witnesses say police shouted at the man “get away, get away” after which he put his hands up in the air.

But when he moved towards the officers again they opened fire. Witnesses reported three to four shots being fired. The man died of his wounds. Images shared on social media showed him lying on the pavement outside the police station with what appeared to be the meat cleaver next to his body.

What do we know of the attacker?

The man had been convicted of theft in 2013, a source close to the investigation told AFP.
Investigators matched the man's fingerprints with those on file for the convicted thief, a homeless man who identified himself at the time as Sallah Ali, born in the Moroccan city of Casablanca in 1995.

Prosecutors have confirmed that a mobile phone was found on the attacker, which may offer them more. Reports say that messages in both Arabic and German were found on the phone. Was it a terrorist attack?

Initially it appeared that police were treating it as an assault by an individual rather than a terrorist attack, but that changed when they discovered a printed flag of the terror group Isis on the man's body.

As well as the Isis emblem, prosecutors say they also found a handwritten claim for the attack written in Arabic. That message made it clear he was attacking police as revenge for deaths in Syria, according to L'Express news site.

BFM TV's own sources says the note contained a declaration of allegiance to the head of Isis Abu Bakr Al-Baghdadi.

As a result the specialist counter terrorist police have taken charge of the investigation and will have the job of determining whether the attacker had any concrete links to Isis or any other terror group.

They will also have to determine whether he decided to act alone or was under orders or guidance from someone else. Was the incident timed to coincide with Charlie Hebdo anniversary?

It appears too much of a coincidence that the attack took place a year to the day since the Charlie Hebdo attack that left 12 dead. It also occurred at the very same time, 11:30am, that Said and Cherif Kouachi opened fire on the staff of the satirical magazine.

However France has seen a number of attacks and attempted attacks since this time last year and the government has frequently warned that more are planned, so the man's motives may have had nothing to do with the anniversary.

It's not the first time police have been attacked in this way?

Thursday's incident in Paris bore a striking similarity to an incident that took place near the town of Tours on December 20th 2014.

On that day French police shot dead a man who attacked them with a knife in a police station in Joué-lès-Tours near the city of Tours while shouting “Allahu Akbar”.

The man injured the face of an officer at the entrance of the police station and injured two others before he was shot.

French police are on high alert after Isis called for their followers to carry out attacks them. Three officers will killed in the attacks of January 2015.

As the Interior Minister Bernard Cazeneuve said on a visit to the Goutte d'Or on Thursday,”the police are on the front line” in the fight against terrorism.