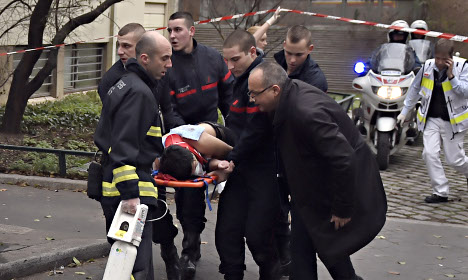 11:58 – AFP have sent out an alert reporting a shooting at the offices of satirical magazine Charlie Hebdo. The alert reads: 'Casualties' as shots fired at French satirical weekly'.

12:00: More reports now say armed gunmen have stormed the offices of French satirical weekly Charlie Hebdo, leaving “casualties”, according to a cartoonist at the magazine whose offices were petrol bombed in 2011 after it published cartoons of the Prophet Muhammad.

“I think there are casualties,” Renaud Luzier told AFP, while other reports said there were at least two wounded in the attack.

Reports on the number of casualties vary, with Reuters claiming ten people have been left dead while local French media reports say seven have been killed.

12:10 – A member of staff at Charlie Hebdo has tweeted out a picture appearing to show colleagues taking refuge on the roof of the offices.

12:24: There are still varying reports on number of casualties. Police sources have now told AFP there is one confirmed dead and six injured.

12:29 – French prosecutors have now confirmed there are 10 dead in the shooting at the offices of Charlie Hebdo.

12:29 – This picture from AFP shows emergency crews taking one victim away in an ambulance. 12:30 –  Our reporter on the scene Priscillia Charles has spoken to representative of a French police union Rocco Contento:

He described what happened a short while ago.

“It was a real carnage inside. They ran away after leaving the building and they exchanged fire with the police.
“One of our colleagues is in a critical condition. Some other colleagues are wounded too.
“They escaped in the direction of Porte de Pantin. Police are chasing them.
“Charlie Hebdo is a newspaper which has been under serious threats. Therefore it was under surveillance. But we didn't expect this carnage inside.
“There is no description of the attackers so far. We know that they are three of them and they had their faces covered.
“They took the driver of a car in hostage.” (The photo shows two gunmen shooting at a police vehicle near the offices of Charlie Hebdo. Photo: AFP)

12:32 – No sign yet as to the motive for the attack on the offices of Charlie Hebdo, but speculation will persist that it may be Muslim extremists. The offices were firebombed in 2011 after the magazine published cartoon images of the prophet Mohammed.

12:33 – Latest reports say it was three armed gunmen who burst in to the offices and opened fire indiscriminately with heavy automatic weapons. 12:38 – French president François Hollande is heading to the scene, which is in the 11th arrondissement of Paris, just off Boulevard Richard Lenoir. An emergency cabinet meeting is to be held at 2pm.

12:41 – Police now confirming 11 dead, including two of their own officers. Reports say the shooting took place just as a police patrol was in the area. Officers “didn't hesitate to open fire”.

Here’s an image that has been tweeted showing a police car covered in bullet holes near the scene of the shooting.

12:45 – The Local's reporter on the scene Rory Mulholland says there is a huge police presence now in the area around Charlie Hebdo's offices, which has lead to traffic gridlock in the area.

12:48 – France has moved to raise its terror alert status to the maximum level after the shooting today 12:56 – The gunmen behind  the deadly shooting, believed to number three, are still on the run. There have been unconfirmed reports of car chases with police and shootings in other parts of Paris. Even from our offices here, in the 19th arrondissement, we can hear a constant stream of police sirens.

This picture claiming to show one of the gunmen who attacked Charlie Hebdo has been posted on Twitter.

12:58 – President François Hollande has spoken of this morning's shooting. “An act of exceptional barbarism has been committed today in Paris against journalists,” he said.

“No barbaric act will ever extinguish the freedom of the press.” 13:00 – Our reporter on the scene Rory Mulholland says family members of the victims are arriving, some as can be imagined in distress. They are being led through police cordon to the scene of the shooting.

13:00 – More distressing images of the victims of this morning's shooting coming through from AFP

13:55 – Various reports say Charlie Hebdo’s main cartoonists “Cabu” and “Charb”, who is the editor Stephane Charbonnier, are among those killed in the shooting.

13:55 – More from AFP on what the attackers were shouting as they stormed the offices of Charlie Hebdo:

The attackers who stormed the Paris offices of satirical newspaper Charlie Hebdo on Wednesday, killing 12 people, shouted “we have avenged the prophet”, according to witnesses cited by a police source.

In a video of the attack filmed by a man taking refuge on a nearby rooftop, the men can be heard shouting “Allahu Akbar” (God is greatest) between rounds of heavy arms fire.

If you are just catching up with what has happened in France today. You can read this wrap by AFP: 12 killed in terror attack on French magazine

The Local's live blog continued throughout the day. Here's a link to The Local's full live blog of January 7th 2015.