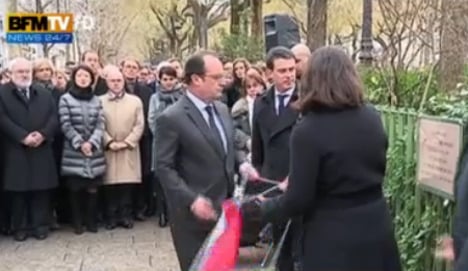 One year after the murder of 17 people including eight members of the Charlie Hebdo staff, France began a series of ceremonies to pay tribute to the victims.

As well as the victims at the satirical magazine, those who died at the hands of the terrorists included a maintenance worker, a festival organizer visiting Charlie Hebdo, three police officers and four members of the Jewish community.

Under a light drizzle, the entourage held a short ceremony at the former offices of satirical newspaper Charlie Hebdo on rue Nicolas-Appert, where Said and Cherif Kouachi gunned down 12 people. A plaque (see picture above) was unveiled bearing the names of those killed at the Charlie Hebdo offices.

Although in a slight embarrassment for authorities it emerged one of the cartoonists' names was misspelled on the plaque.

Paris city authorities said the company that carried out the engraving of the plaque had made the mistake and would correct the name later on Tuesday.

An official said Wolinski's widow, Maryse, had been informed of the error and the action that was being taken.

Nevertheless she was left fuming.

“This morning, when I saw the 'Y', I can tell you I was furious,” Maryse Wolinski told French television.

She said she pointed it out straight away to Paris Mayor Anne Hidalgo, who had unveiled the plaque alongside the president, and was assured that the mistake would be quickly corrected.

Asked what her cartoonist husband would have thought of the typo, Wolinski suggested it was no joking matter.

“He didn't like it at all when (his name was spelled with a 'Y'), that I can tell you. And as for me… frankly I'm hard pressed to see the humour in it because I am too angry.”

A similar ceremony took place on Boulevard Richard Lenoir, where a policeman was killed.

Hollande, Valls, and Hidalgo stood silent by the plaques, laying wreaths beneath on the ground below.

Later in the morning, the politicians are expected to head to the Hyper Cacher supermarket at the Porte de Vincennes where Amedy Coulibaly gunned down four Jewish people.

It was the beginning of a week of events, which will culminate in the unveiling of a memorial plaque in the Place de la Republique, all played out amid tight security with Paris still on edge after the November attacks. A plaque will also be unveiled in the Paris suburb of Montrouge where policewoman Clarissa jean-Philippe was gunned down by Coulibaly as he was set to attack a Jewish school in the neighbourhood.

On Thursday January 7th, the actual anniversary of the first attack against Charlie Hebdo, President Hollande will give a speech at the police headquarters in Paris where he will honour those who took part in the operation to hunt down the terrorists and the dramatic shoot outs. He will also pay tribute to the three police officers killed in the attacks.

On Saturday January 9th Hollande will head to the Hyper Cacher supermarket to mark one year to the day since Coulibaly went on the rampage.

He will attend a ceremony organised by the CRIF, an umbrella group for Jewish organisations in France.

Survivors, witnesses and the families and loved ones of the victims have been invited to attend alongside city officials.

In the morning, a plaque will be unveiled at the foot of an oak tree specially planted for the occasion.

French singer Johnny Hallyday will perform his song One Sunday in January before the French army’s choir sing the Marseillaise.