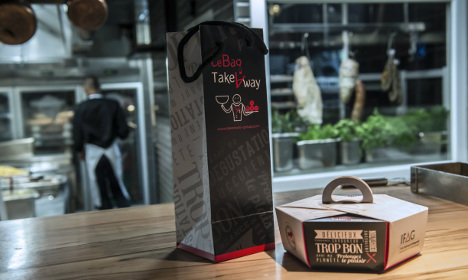 "Doggy bags" in the kitchen of a restaurant in Lyon. Photo: AFP
A new French map
It's 2016 and France now has 13 regions – down from 22 – thanks to a major rework of the regional map.
The new map, pictured below, saw some regions like Brittany unchanged, but the fusion of two or even three regions in some other cases. The move is an effort to streamline regional councils and to run the country more efficiently.
The names of the new regions remain unannounced, and for the moment are just a combination of the names of the previous regions.
If you want to see an interactive map detailing the changes, head over to this page on the official government website, or click here to read more about the new regions and their capitals. Paris gets bigger
January 1st sees the official launch of Grand Paris, or “La Métropole du Grand Paris” to give it its full name.
Essentially, the project means that the large Parisian suburbs of Hauts-de-Seine, Seine-Saint-Denis and Val-de-Marne – as well as a handful of smaller communes – will now become much closer integrated with the capital in the aim of inter-communal cooperation.
Grand Paris will see over 200 councillors working together on everything from environmental issues to economic development.
Increase in minimum wage
Those on minimum wage in France can expect an ever-so-slightly fatter wallet – with a six-euro increase per month. The minimum hourly wage is now €9.67 an hour, or €1,466.62 a month.
Tampon tax drops
The tax on women's sanitary products has dropped from 20 percent to just 5.5 percent. This has been a hot topic in France, seeing protests from women's groups around the country who argued that tampons should be taxed like condoms, or food.
The government initially opposed changing the rate, saying it would reduce tax receipts in 2016 by €55 million.
Drop in gas prices
For the fourth consecutive month, France's gas prices have fallen, this time by an average of 2 percent. The prices have dropped by an average of over 10 percent since January last year.
Doggy bags introduced
Restaurants now officially need to provide doggy bags for customers who want to take their meal home. The law applies to any restaurant that serves over 180 meals per day.
It's a move by the government to cut down on the 7 million tonnes of food wasted in France each year – but it remains to be seen if the French will adopt this typically American custom.
Get paid to cycle to work
Those who cycle to work are now eligible for a little extra pocket money, with a new plan rolled out to pay cyclists 25 cents for every kilometre they cycle between their home and their office. Payment is capped at €200 a year. There's more information here (in French)
Pay less taxes
France is set to get a simplified tax system this year which will see income tax (Impôt sur le revenu) taken automatically at source rather than the following year after the individual annual declarations.
It is estimated that 8 million people in France will pay less tax this year than they did in 2015, with new “one stop shops” opened around the country to make bill paying easier.
Increase in bank fees
The average fee to have a bank account in France is set to be €16 this year, compared to €12 last year.
January will see several jumps in these maintenance fees, notably at the Banque Postale, which will leap from €4.20 to €6.20.
And even though there were no fees in recent years, January will see the implementation of new fees at BNP Paribas, Société Générale, and Caisse d'Epargne Ile-de-France – which will charge an annual €30, €24, and €15 per account.
Extra “terrorism taxes”
Those with home or car insurance will pay a bit more “terrorism tax” – meaning the total will jump from €3.30 to €4.30 from January on.
This money will go towards helping the families of terror victims and those who have been injured in terror attacks.