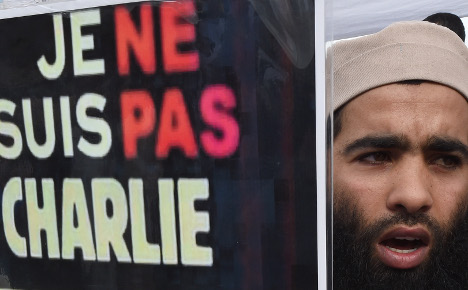 A man protesting against Charlie Hebdo, soon after the attacks last January, in Morocco. Photo: AFP
Charlie Hebdo is set to mark one year since 12 people were killed in its headquarters in terror attacks in Paris, and will be releasing a million copies of its newest edition on Wednesday.
And as many times before, the newspaper's choice of front cover has ruffled feathers among religious leaders.
It shows a bearded man representing God, with a Kalashnikov slung over his shoulder and accompanied by the text: “One year on: The assassin is still out there”.

Religious leaders in France were not impressed.
“From the cradle to the cross, our God is always shown unarmed,” wrote Pierre-Hervé Grosjean, a Catholic priest with a strong online following.
The head of the Christian Democrat Party, Christine Boutin, took to Twitter to shame the newspaper.
“The front page of the Charlie Hebdo anniversary, and what is it referring to? Religions? It's becoming an obsession. This tragedy deserved better.”
Meanwhile, Anouar Kbibech, president of the French Council for the Muslim Religion (CFCM), said the cartoon sends out the exact wrong message.
“What we need are signs of conciliation and harmony,” he told Le Parisien newspaper. “And this cartoon isn't helping in a time when we need to be standing side by side. It's putting people of all faiths together.”
He added that while it was equally important to respect people's beliefs as it was to respect journalists' freedom of speech.
Nicolas Henin, a journalist who was taken hostage by terrorists in Syria in 2014, called the cover “catastrophic”.
“It's nothing but a disaster to reduce terrorism to religious dimensions,” he tweeted.
The response from the French public has been mixed on social media.
While many expressed their outrage and disgust – indeed one Tweeter shared their own cartoon of a dog urinating on the gravestone of Charlie Hebdo – others supported the paper's right to freedom of speech.

One called the front page image “a misrepresentation of God by all forms of extremists”, but added: “I am a Catholic, I am Charlie”.