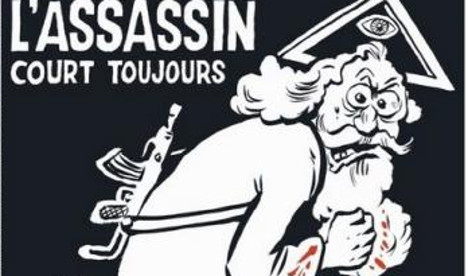 French satirical weekly Charlie Hebdo will mark a year since an attack on its offices with a cover featuring a bearded man representing God with a Kalashnikov slung over his shoulder, accompanied by the text: “One year on: The assassin is still out there”.

One million copies of the special edition will be available on news stands on Wednesday, with tens of thousands more to be dispatched overseas.

It will mark a year since brothers Cherif and Said Kouachi burst into Charlie Hebdo's offices in eastern Paris and killed 12 people, including eight of the magazine's staff.

The January 7, 2015 attack, claimed by Al-Qaeda's branch in the Arabian Peninsula, came after a 2011 firebombing of its offices that forced it to move premises.

Its staff had also been under police protection since it published cartoons of the Prophet Mohammed in 2006.

Included in the special edition will be a collection of cartoons by the five Charlie Hebdo artists killed in the January 7, 2015 attack as well as several external contributors.

Cartoonist Laurent Sourisseau, who took over the management of the weekly in the aftermath of the attack, also penned an angry editorial in defence of secularism. It denounces “fanatics brutalised by the Koran” as well as those from other religions who hoped for the death of the magazine for “daring to laugh at the religious”.

A month before the attack, Charlie Hebdo was close to shutting down as sales had dipped below 30,000. Its brand of provocative, no-holds-barred humour appeared to have gone out of fashion.

But the attack sparked horror across the world. Donations poured in for the victims, 7.5 million people bought the first post-attacks issue and 200,000 people signed up for a subscription.

The Charlie Hebdo attacks were followed in November by a coordinated assault on multiple locations in Paris, claimed by the Islamic State group, which left 130 dead.