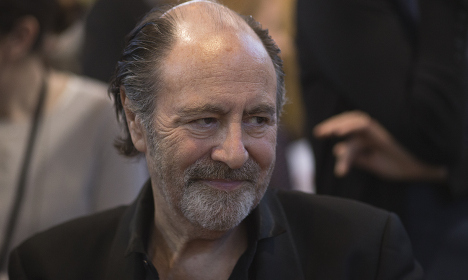 Delpech had been in hospital in Puteaux, in Paris's western suburbs, battling throat cancer, his wife told AFP, sparking a wave of tributes.

“Michel Delpech died without ever having aged,” French President Francois Hollande said in a statement.

“His songs touched us because they spoke to us. To our emotions as well as our difficulties. He reflected the 70s better than anyone.”

Pascal Negre, the head of Universal Music France, chimed in, tweeting that Delpech was “a poet speaking about the lives of people, an unparalleled melodist and an endearing man”.

Born on January 26, 1946 in the town of Courbevoie, Delpech was rasied in a modest family with two sisters. His father had a small metal plating workshop and his mother was a housewife.

He released his first song aged just 18, and quickly broke out with his first hit, “Chez Laurette”, in 1965, achieving fame for chronicling France in the 1970s.

Delpech soon also lived the lifestyle of a music star, once telling the newspaper France-Soir of his image as “Prince Charming, a singer for women wearing polka dot shirts”.

“I had in me a combination of pride and arrogance,” he told the daily.

But his meteoric rise was accompanied by a sharp fall, with divorce in the late-1970s plunging him into a years-long depression that sent him looking for answers in Hinduism, clairvoyance and psychoanalysis.

Though he recovered, in 2013 he was diagnosed with the cancer that eventually claimed his life.