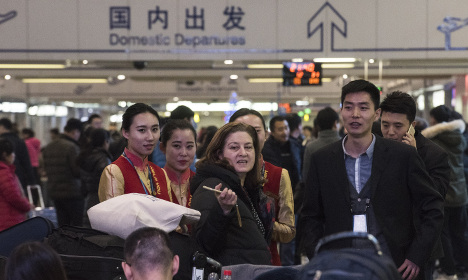 Beijing accused Ursula Gauthier, the China correspondent for France's L'Obs news magazine, of supporting terrorism after she wrote an article questioning official comparisons between global Islamist violence and unrest in the homeland of the mainly Muslim Uighur ethnic minority.

It then refused to renew her credentials, obliging her to leave on December 31 when her visa expired.

Speaking from her Beijing home before departing, Gauthier said the future looked bleak for journalists in China.

“What happened with this small article about Xinjiang could happen with anything else,” she said.

“This could be really dangerous in the future.”

France and Europe should be “concerned about what is going on here, not because it is a journalist, not only because of the freedom of press, but also because it is about China and what China is doing to its minorities, and even its majority, the problem is the same,” she added.

After landing in France, Gauthier vowed to continue writing about China and condemned Beijing over her effective expulsion.

“This has been a month and a half of madness,” she told AFP at Charles de Gaulle airport in Paris.

“We must not expel a journalist who was just doing her job, who just wrote an article, who knows the situation,” she said.

In her story for L'Obs, Gauthier questioned China's motives in expressing sympathy for the victims of the November 13 Paris attacks, writing that they were calculated to tie Beijing's harsh policies in Xinjiang into the fight against global terrorism.

The veteran reporter, who has spent six years in China, suggested that violence by Uighurs against civilians in the region — where clashes have killed hundreds in recent years — was in part driven by resentment of government policies.

“I was simply explaining that the Uighurs' anger came from somewhere, just like we can explain the origin of the anger of young Arabs who become radicalised, there are roots to it,” she added.

The French foreign ministry on Thursday urged Chinese authorities “to re-examine Ms Gauthier's request so she can return to carry out her mission in China”.

“France reiterates its commitment to the free exercise of journalism everywhere in the world,” it said in a statement.

Gauthier said she views her treatment as an attempt “to intimidate foreign correspondents in China, particularly on issues concerning minorities, especially in Tibet and Xinjiang”.

Chinese media and officials strongly criticised her article, with the Communist Party-affiliated Global Times saying it “severely distorted the reality in Xinjiang” and represented a “double standard” on terrorism.

The journalist said her home address was posted online alongside death threats from angry readers.

Asked whether Gauthier would ever be allowed to return to China, ministry spokesman Lu Kang left the issue open on Thursday, telling a regular briefing: “It entirely depends on her.”

Foreign correspondents' visas in China are tied to their official credentials, so that the ministry's refusal to renew her press card meant her right to remain in the country would expire on December 31.

The decision to effectively expel Gauthier has been widely criticised by press freedom groups such as Reporters Without Borders.

L'Obs director Matthieu Croissandeau told AFP: “This is an unacceptable attack on freedom of information and creates a real obstacle for journalism in China.”

The French government, which earlier called the denial of the visa “regrettable”, defended its actions, saying it had reached out to Beijing several times to get it to reconsider its stance.