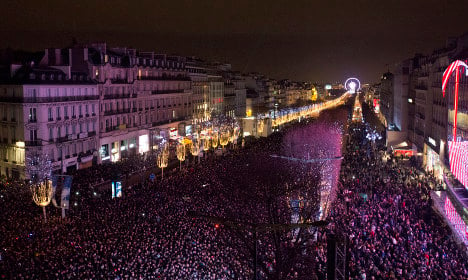 People gather on the Champs-Elysees avenue before celebrating the New Year in Paris. Photo: Florian David/AFP

While the traditional fireworks display was cancelled this year over fears of a terrorist attack, crowds still filled the iconic boulevard lined with trees donning sparkling garlands to welcome 2016.

“It's New Year. We wanted to have fun as usual, in spite of everything, so we came on the Champs as this is the perfect place for it,” said Joy along with her friend Rebecca, in their 20s, who came for the celebrations.

“I'm not particularly scared,” said Joy. “An attack can happen anywhere at any time. But that can't stop us from living.”

Behind her, Western tourists uncorked a bottle of wine while some Asian visitors took a photo and several older couples danced.

The festivities are the largest public gathering since jihadists killed 130 people in Paris in November in a wave of gun and suicide bombings claimed by the Islamic State group.

“After what our city has lived through, we have to send a signal to the world,” said Paris mayor Anne Hidalgo, promising a “sombre and dignified show”.

In the Place de la Republique square in central Paris, visitors flocked to an open air shrine for the victims of the November 13 attacks.

Lila Rehane, a 49-year-old from the southern French city of Marseilles who came to pay homage at the site, said she wanted to see peace return in 2016 after a year of “anguish”.

A few hundred metres away, Walid Abdelhamid, a 28-year-old trader, said he hopes “the mood will improve,” and that “people will stop and think when it comes to questions about religion”.

“When the religious question is settled, everything will be settled, even the economic problems,” Walid said, predicting that many French will remember 2015 as a “crappy year”.

Ten minutes before midnight on the Champs-Elysees, the Arc de Triomphe was illuminated in the French flag's colours of red, white and blue, while the national anthem rang out to applause from the crowds.

A giant video screen then showed people smiling with images of famous Parisian landmarks, finishing with a virtual firework display.

“It's a shame they cancelled the fireworks, it almost like giving in to the terrorists,” said Oceane, 14, standing near one of the many screens lining the avenue.

The diminished revelry took place under the watchful eye of some 1,600 police and security officers deployed around the Champs-Elysees where all visitors' bags were searched.

And while an estimated 600,000 people gathered for the celebrations, the crowd seemed smaller than the previous year.

“I didn't want to stay at home alone with my daughter,” said Oceane's mother Sandrine. “So we came here, with the families in mourning (after the attacks) in our thoughts.”

At five past midnight, with the video show over, the crowd began to leave.

“It was a bit cheap, but good given the circumstances,” joked Arthurn, a student.

“Now we are going home to finish the party.”