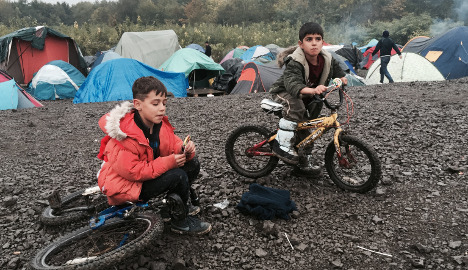 The camp, in the town of Grande-Synthe, close to the Channel port of Dunkirk, will be built in January, according to Le Monde. It will provide sanitary conditions for all of the nearly 3,000 refugees and migrants currently living in tents and makeshift shelters on the site, which has been referred to as France’s ‘forgotten’ refugee camp.

Currently, conditions at the camp are considered by many to be worse than those at the ‘New Jungle’ camp in Calais. When The Local's reporter visited in October, he described the camp as “squalid”.

The project to improve conditions is the brainchild of Damien Carême, mayor of Grande-Synthe, and aid organisation Médecins sans Frontières (MSF). The €1.5 million cost will be borne by the French state.

In a joint statement quoted in Le Monde, Mayor Carême and Interior Minister Bernard Cazeneuve promised to “rapidly put in place a solution to provide a humanitarian response to the basic needs of the migrants, and particularly to the vulnerable groups on the site.”

According to Delphine Visentin of MSF the camp will meet international humanitarian standards:

“There will be sufficient sanitary facilities and migrants will sleep in tents that will be heated in winter,” she told Le Monde.

The Grande-Synthe camp is mostly home to Kurds who have fled Isis in northern Iraq. When The Local visited the camp, families were living in ragged tents that left them exposed to the elements.

The settlement in Grande-Synthe has existed since 2006 but for years had fewer than 100 migrants. Since September its population has exploded.