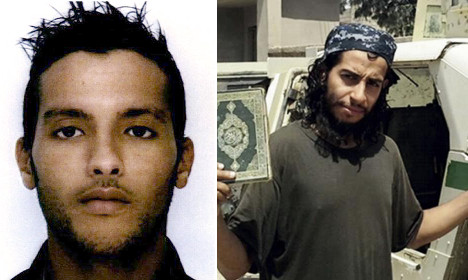 Charaffe el Mouadan, left, and Abdelhamid Abaaoud. Photo: AFP
The Pentagon said Mouadan had “direct” links to Abdelhamid Abaaoud, the Belgian jihadist who was suspected of planning the coordinated attacks on Paris on November 13 and was killed by police five days later.
A French source was cautious as to whether Mouadan played any operational role in those attacks but gave details about his part in France's jihadist scene.
“As things stand now, there is nothing to prove (Mouadan's) involvement” in the Paris attacks, the source said.
But, the source added, Mouadan was close to Samy Amimour — a former Paris bus driver who went to Syria to fight and returned home to wreak havoc at the Bataclan music venue, where 90 out of the 130 people killed that night lost their lives.
So close were the links that the Mouadan family home in Drancy, a grimy suburb north of Paris, was searched by police four days after the Paris attacks.
The Pentagon said Mouadan had been planning attacks against the West, although a spokesman gave no further details. He was killed in a US-led coalition air strike on December 24.
Long before he made it to Syria, Mouadan had harboured ambitions of fighting with Islamic extremists, according to investigators.
He and Amimour were arrested in 2012 along with a third Drancy resident, Samir Bouabout, as they were preparing to travel together to fight in Yemen or Afghanistan, they say.
Mouadan 'the leader'
A source close to the investigation said Mouadan was clearly the leader of the trio.
One of eight children, he was born in the Paris suburb of Bondy to Moroccan parents.
His father was a mechanic. Charaffe El Mouadan obtained French nationality in 1992.
His path to radicalisation appears to have been through the Internet, just as investigators believe was the case for Amimour and Bouabout.
A friend told anti-terrorist investigators that despite growing up in a Muslim family, Mouadan “was not really into religion at the start”.
But later he developed an “extremist outlook”, without ever attending any particular mosque.
In March 2012, Mouadan, Amimour and Bouabout enrolled in a shooting club. Mouadan took out a 20,000-euro ($21,900) loan to finance their aborted trip to Yemen.
After he was prevented from going there, Mouadan told investigators he had abandoned his plans to wage jihad and had instead decided to travel to an Islamic country to perfect his knowledge of Arabic.
In fact, he and Bouabout appear to have spent a short time in Tunisia, an investigation source said. Their plan to travel to Yemen foundered because of their poor grasp of Arabic and a lack of contacts.
The three men were then arrested in France but freed. Like hundreds of other Westerners, a year later they had found their way to Syria and the chaos of the civil war, with Mouadan the first to make his way there.
Within days, on September 6, 2013, Bouabout and Amimour were spotted in Turkey, the main crossing point for Western jihadists seeking to get into Syria.
Also with them was Omar Ismail Mostefai.
Two years later, Mostefai would join forces with Amimour in the trio of suicide vest-wearing attackers at the Bataclan.
Mouadan claimed he had gone to Syria for “humanitarian” reasons, yet he sent photographs to at least one friend showing him smiling and heavily armed, a source said.
French investigators believe Mouadan, Mostefai and Amimour remained in the same area while they were in Syria.
They initially thought the fourth member of their group, Bouabout, had slipped back into Europe through Greece in September hiding among refugees but they are now sure he was in Syria at the time of the attacks in Paris.
Mouadan's role in the Paris attacks is unclear. One witness at the Bataclan said one of the killers spoke about phoning “Souleymane” during the shootings.
The name “Abou Souleymane”, or father of Souleymane, is a nickname that Mouadan used in Syria and on his Twitter account.
But it it is a common nickname and investigators believe the gunman might have been referring to another “Abou Souleymane”, who is based in Belgium.