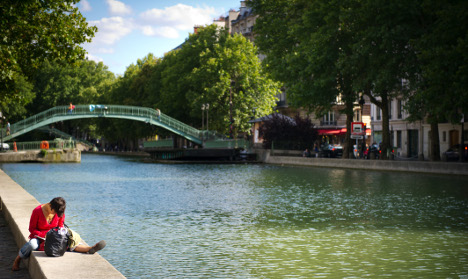 The Canal Saint-Martin in Paris. Photo: AFP
What do you think is at the bottom of the Canal Saint-Martin?
Well, you can probably take a look for yourself if you're in the tenth arrondissement of Paris in the first four months of 2016.
City officials are planning to drain the waterway in January – and then thoroughly clean and renovate it.
The last time this happened was in 2001 when workers carried out maintenance on some of the locks – so who knows what the cleaners might find.
One thing that seems very likely is fish. Workers collected 18 tonnes of them (which were released further downstream) during a clean up effort in 1999, as well as fridges, tyres, and car parts. A previous clean-up in 2011. Photo: AFP
You can imagine more than a few Velib rent-a-bikes will be down there too.
The huge cleaning job will begin at the northern side of the canal at Place de la Bataille de Stalingrad, and will be conducted all the way along to the Rue du Faubourg du Temple where the canal heads underground.
It will be made possible by the construction of a watertight dam further north-east at the Bassin de la Villette.
The canal is a hugely popular summer hangout for locals and tourists alike, many of whom sit along the banks watching the barges cruise to the Seine River.
And the cleanup couldn't have come sooner, with residents' frustration peaking during the summer after a heatwave drew larger crowds to the watering hole.
“The canal is no picture postcard… it's a jungle. One big rubbish bin,” one irate resident told The Local at the time, soon after the launch of the Collectif du Canal Saint-Martin blog, which was created to draw attention to the litter problem.
The waterway has seen better days in the past, and was made world famous in the film Amélie, when Audrey Tautou skimmed stones along the surface.
It's a safe bet Amélie's stones won't be among the most intriguing treasures uncovered from the depths of the canal.