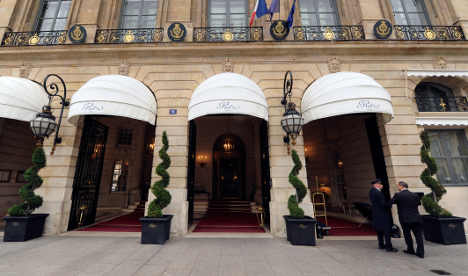 Of course, the old favourites are still here; the Louvre, the Eiffel Tower, the delicious wine. But there are some very good reasons to make 2016 the year you visit France, whether for the first time or for the hundredth.

Over the next year, the country will play host to the UEFA Euro football championship and commemorations of some of World War I’s biggest battles, and there are some exciting new openings of museums and hotels.

At France’s first annual tourism convention back in October, Foreign Minister Laurent Fabius spoke of the measures the French government is taking to improve its tourism offerings, including social media communications, better booking systems and professional training for staff, so visiting should run more smoothly than ever.

An aerial view of the island. Photo: Pascal Pochard-Casabianca/AFP

As an alternative to the bright lights and crowds of Paris, explore the car-free, idyllic island of Porquerolles in the Port-Cros National Park Reserve, just off the French Riviera coast. If the white beaches and woodland paths weren’t a good enough reason to visit, from 2016 it will become the setting for contemporary art displays from the Carmignac Foundation, which says it will create paintings and sculptures “in harmony with the unique surroundings”.

OK, it’s never going to be a bad time for wine-lovers to visit France, but why not have your visit coincide with Bordeaux’s annual wine festival in the last weekend of the June, when you can also visit the city’s new Wine Musuem, opening earlier in the month.

The Cité du Vin will be housed in a huge glass tower which will dominate the skyline. Visitors can learn about wine and culture using interactive displays, before enjoying a view over the city – and the region’s vineyards – from the observation deck or the seventh floor restaurant. Naturally, there will also be a wine bar, and even tasting workshops.

Visitors admiring rock art in another of the region's caves. Photo: Patrick Kovarik/AFP

For a unique historical and cultural experience, head to the Lascaux caves, a Unesco World Heritage site in southern France. Next summer, Lascaux IV, a combination of interactive displays and art exhibitions, will open in the huge cave complex in the Vézère Valley. The caves in this area are famous for the art etched into their walls and estimated to be over 17,000 years old.

A replica of a cave which used to lie in the same spot, Lascaux IV will teach visitors about cave life in prehistoric times, rock art, archaeology, and there will also be exhibitions from international contemporary artists.

Cheer on your team at the Euro championships, cities across France

The trophy which will be won by one deserving team. Could it be France? Photo: Loic Venance/AFP

There’s never been a better time for football fans to visit France, as the country hosts the 2016 UEFA European football tournament from June 10th to July 10th – the biggest ever, with 24 sides competing. France itself will be in a group with Romania, Albania and Switzerland, the draw on December 12th revealed.

Matches will be hosted by cities in all corners of the country; Bordeaux, Lens, Lille, Lyon, Marseille, Nice, Paris, Toulouse, Saint-Denis, Saint-Etienne, and in January Lyon will be unveiling a new stadium built specifically for the event, so you can add a football flavour to your trip whichever region you want to visit.

Be one of the first guests at a newly renovated five star hotel, Paris

The Paris Ritz, pictured just before it closed its doors for the renovation project. Photo: Kenzo Tribouillard/AFP

Anyone with a penchant for luxury travel is sure to relish the chance to be one of the first guests through the doors of newly renovated world-famous hotels Hotel Crillon and the Paris Ritz. The Ritz was home to Coco Chanel and Ernest Hemingway for years, and countless celebrities have stayed in its rooms – the grandest of which has been declared a national monument by the French government.

Both hotels have military links; during World War II, the occupying Germans used the Ritz as the local headquarters of the Luftwaffe, and the Crillon’s eastern building is still used as the headquarters of the French Navy today. Even if a stay in one of their luxury suites is beyond your budget, just visiting the buildings gives you a taste of French cultural history.

The Thiepval Memorial to the Missing of the Somme. Photo: martin_vmorris/Flickr

2016 marks one hundred years since some of the most famous – and deadly – battles of World War I. The Battles of the Somme, the first Allied offensive of the war which saw over 600,000 Allied lives lost, will be commemorated. The battle will be remembered in events held jointly by the French and British governments, starting on the 1st July – the anniversary itself – and continuing throughout the summer to mark the battle’s 141-day duration. The Verdun Memorial will also open this year, commemorating one of the Somme’s major battles.

It’s also the 950-year anniversary of the Battle of Hastings, which will see a variety of commemorative events in the Normandy region.

A statue of d’Artagnan, the inspiration for the path. Photo: Histoiredegascogne/Wikicommons

Keen equestrians have an incentive to travel to France in the form of the new route d’Artagnan, which will allow horse-riders to cross the country as well as into Spain, Italy, Belgium and the Netherlands. The stretch between Champlécy and Sainte Croix is scheduled to be completed in early June, and the entire bridle path will be finished by the end of the year.

The route will set off from Lupiac in southwestern France, the birthplace of d’Artagnan, who is the protagonist of the novel The Three Musketeers. And fans of the book might also be excited by the opening of a Three Musketeers musical in France in September next year.

If you think you’ve seen all the art that the capital has to offer, why not venture further afield to one of the country’s most-visited museums outside the Paris region, the Unterlinden Museum in Colmar. Reopening after a five-year renovation, it displays regional and international artworks from prehistoric times to the present day.

A former convent and the municipal baths have been redesigned and a new building constructed to better present the museum’s impressive collections, which include the Isenheim Altarpiece, a sixteenth century altarpiece and the Unterlinden’s most famous work.

Le Grand Depart will take place at the foot of Mont St Michel in 2016, one of France's most popular tourist spots. The island monastery attracts three million visitors each year, a number which is sure to rise next year. Normandy has hosted stage finishes of the race previously but this time it takes centre-stage, with the first leg of the race following a 188 km stretch of the Normandy coast and finishing on Utah beach, the site of the 1944 D-Day landings.

The Salon de l'agriculture is running from February 27th to March 6th with the theme 'agriculture on the move' and a focus on sustainable farming in the wake of 2015's COP climate accord. New in 2016 are extended opening hours so you can pack more into your visit, extra exhibitions and plenty more animals.