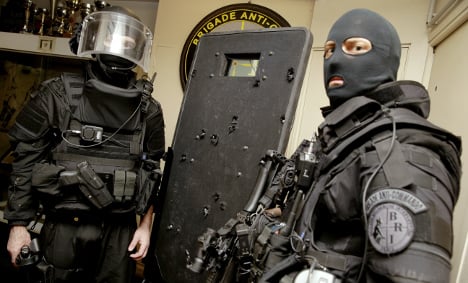 French police commandos pose with a bullet-hole riddled riot shield that was used during the assault at the Bataclan theatre. Photo: AFP
“Where is the singer? Where are Yanks?”
These are the words that were reportedly spoken by the three terrorists who went on a bloody rampage at the Bataclan in Paris last month.
On the stage at the time was the band Eagles of Death Metal, the members of which fled and escaped with their lives.
Ninety others who were at the venue weren't so fortunate.
The information comes courtesy of the leaked judicial inquiry, details of which were published on Monday by Le Figaro newspaper.
The disturbing details provide a glimpse inside the concert hall at the time of the attack, which was the worst hit during the November 13 attacks, a night which saw 130 killed in total.
Witnesses said that one of the terrorists took time out from the killing spree to play a few notes on a nearby xylophone, “laughing sarcastically” at the hostages.
Others reported that a gunman said: “You are bombing with the Americans, so we are targeting you and the Americans”.
The Eagles of Death Metal frontman Jesse Hughes has raised eyebrows in France with his vehement opposition to gun control in the US and support for Donald Trump, the controversial Republican contender for the White House.
A documentary about the colourful singer, “The Redemption of the Devil”, was pulled from the Amsterdam film festival last month in the wake of the killings.
In the film, the singer, who is also a priest in the Universal One Church, brandishes various firearms as he jokes with friends.
Le Figaro also reported investigation details about the failed attack at the Stade de France football match, where three suicide bombers took their own lives and that of one bystander.
The men had repeatedly tried to get inside the building before the game began, the paper reported, “whispering in Arabic” at the time.
Investigators revealed this week that the wife a Bataclan shooter boasted that she was “proud” of her husband shortly after the attacks.
Three days after the massacre, the woman emailed an old friend in France saying: “Did the attacks shock you? LOL,” before boasting that her husband had been one of the assailants.
Her husband, Samy Amimour, was buried on Thursday in the Seine-Saint-Denis suburb of Paris where he grew up and his parents still live. A source from the town hall said: “There were very, very few people there.”