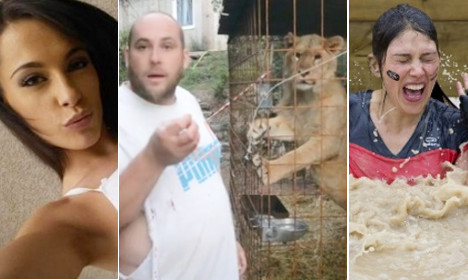 Photo: Twitter/Nikita Bellucci
Paris Metro thief saves victim from tracks
The sequence of events in this story – which was all captured on CCTV – gets more baffling by the second. In short, the viral clip sees a pickpocket save the man he robbed from the tracks of the Paris Metro – while a bystander looks on without helping. Photo: Screengrab/Youtube
Crew cheer mile-high sex couple on Paris flight
An air steward on a flight from Paris stunned passengers by making an announcement to ironically congratulate a couple caught “reproducing” in the plane's toilet.
“People around the plane started cheering and laughing and there was a lot of gossiping about who it could have been,” one passenger told The Local at the time.

Photo: TT
French drug dealers offer customer loyalty cards
Just when you thought you'd heard it all, reports come in from Marseille where drug dealers have taken to handing out loyalty cards for their customers.
“We look forward to seeing you in the neighbourhood, thanks for your loyalty,” say the cards.
“I thought I was hallucinating,” said a local.

Photo: Dave H/Flickr
French manager paid to do nothing for 12 years
The story of a Frenchman named Charles Simon made waves in France in August after it emerged the manager had been paid more than €5,000 a month by state rail operator SNCF over a period of 12 years, despite not working for a single day.
The best bit? He then asked for €500,000 in compensation.

Photo: AFP
Frenchman develops 'cure' for builder's bum
A budding inventor made headlines after coming up with a pair of special underwear that caters for the infamous “builder's bum”.
The Frenchman was modest about his invention, however.
“It's not like I've found a cure for Aids – just for the builder's crack,” he told The Local.

Photo: cobalt123/Flickr
French village's €1 land offer sparks global frenzy
The mayor of a tiny, underpopulated village in northwestern France was inundated with calls from around the world after he decided to sell off land for just €1 per square metre in a bid to attract new villagers.
“It has created far more interest than we could have imagined,” the town's surprised mayor told The Local.

Photo: GoogleMaps
Frenchman fights to keep his 'placid' garden lion
A Frenchman was arrested after threatening to commit suicide if police confiscated the 14-month-old lion he was keeping in his garden.
“Does he look aggressive to you? Not at all. I play with him. I stroke him. He's mine,” said the lion's owner, who was pictured in front of the cage with a huge rip in his shirt. Indeed.

Photo: Screengrab Midi Libre
Hundreds violently ill after French 'mud race'
If you needed another reason not to take part in mud races then look no further. Almost 1,000 French people fell ill after taking part in a Mud Day race in southern France, with the finger of blame being pointed at the bacteria in the mud.

Photo: AFP
April Fools bonus: Paris bistros crack down on loud-mouthed tourists
And lastly, we've included our April Fools' story – which may just be the most believable of all the stories on this list. Many of you were fooled when we wrote that numerous cafes and bistros across Paris had signed up to a provocative campaign aimed at cracking down on loud-mouthed foreign tourists, claiming they're ruining “the sophistication of the Paris dining experience”.
Perhaps it was the photos and videos in the story that made this one of the most read stories of the year – or perhaps it's just because the story is just so believable.