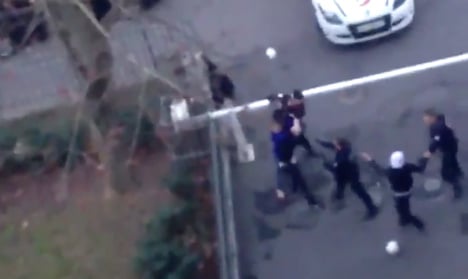 Photo: YouTube Screengrab
The altercation took place on Saturday afternoon in Pantin, in the northern Paris suburb of Seine-Saint-Denis as a woman tried to stop officers from arresting her sons, aged 18 and 15.
Police have said they were making the initial arrests after the teens had insulted them during an ID check, reported Le Figaro newspaper, but the woman was reportedly unaware of this at the time.
Footage filmed from a nearby apartment building shows several police officers surrounding the woman, with one officer appearing to repeatedly punch her, as the person filming repeatedly swears in shock.
The clip, which has since been uploaded to YouTube, begins after the altercation has already begun.
Speaking to France 3 on Monday, the visibly agitated woman who was beaten says “Look at how they are beating me! I was pulling away my son because it was the beginning of a massacre”.
The woman was taken to hospital, where medical staff noted she had suffered from “physical aggression and tear gas from the police”. Doctors prescribed her “partial temporary incapacity for ten days”.
As well as some minor injuries, the woman suffered from psychological shock, noted doctors.
On Monday, France 3 reported that the woman had lodged an official complaint about how the police had handled the matter. Her two sons, meanwhile, remain in custody.