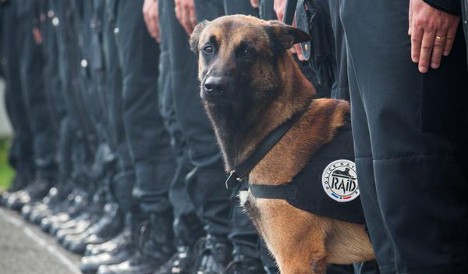 Photo: French Police
Diesel died in November during a police raid on an apartment in a northern suburb of Paris, which killed the alleged mastermind of the attacks in which 130 people died.
The animal's death led to the hashtag #JeSuisChien (I Am A Dog) trending on Twitter.
The People's Dispensary for Sick Animals (PDSA) said the seven-year-old Belgian Shepherd would now receive the Dickin Medal, described as its “supreme honour for gallantry”.
The medal was introduced in 1943. Previous recipients include pigeons which carried messages behind the front lines in World War II and military dogs which sniffed out Taliban bombs in Afghanistan.
The PDSA's director general, Jan McLoughlin, said: “As guardians of the world's most prestigious animal awards programme, we were inundated by
messages from members of the public to recognise (Diesel's) heroism.
“The PDSA Dickin Medal recognises conspicuous devotion to duty in the theatre of conflict and Diesel is a truly deserving recipient.”
A formal ceremony marking the honour will take place next year.