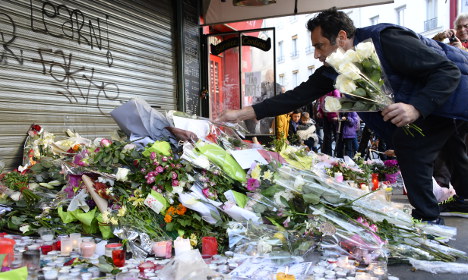 Mourners leave flowers and candles at a memorial site outside of the Le Belle Equipe, for victims of the November 13 terrorist attacks in Paris. Photo: AFP

A quick analysis of Google Trends will reveal that France was the most talked-about country in the world in 2015.

And sadly it wasn’t people searching for information about its gastronomy, fromage or haute couture.

On the morning of January 7th there was nothing to suggest France would be in for such a traumatic 12 months.

Just after 11:30am on the day I was about to send our intern out to Galeries Lafayette in Paris to do a feature on the New Year Sales and see whether French shoppers were feeling confident enough to splash some cash despite the doom and gloom around the economy.

Then came news of a shooting outside the offices of Charlie Hebdo magazine. For a moment we thought it could just be a drugs thing, a settling of scores or a reglement de comptes as the French say.

Then within seconds came the next alert from the news agency AFP that 10 people had been killed. We all know what happened next.

But strangely that attack, as bloody and barbaric as it was, did not really prepare us for what came at the end of the year.

On the evening of November 13th, I got another news alert to my mobile phone.

This time it was the broadcaster BFM TV. I just saw the words “explosion Stade de France”, but couldn’t open the message because I was in the hills of northern England and there was a storm blowing and mobile phone reception was poor.

We all know what happened next there too.

The two terror attacks defined the year and will continue to define the country for years to come. They left France, and particularly Paris, a changed place.

Laws have been changed and people’s daily habits have been altered, because as the government keeps reminding us, “we are at war”. Sadly the end of 2015 will not mean everything just reverts to normal.

Apart from the terror attacks, the eyes of the world were also on France on March 24th when a German co-pilot purposefully crashed a passenger plane into the French Alps, killing all 150 people on board.

The black box from the Germanwings crash. Photo: AFP

The tragedy of course had little to do with France other than the other pilot decided to leave the cockpit and relieve himself over the French Alps, giving Andres Lubitz the chance to commit mass murder.

But one tragedy in 2015 that had everything to do with France is the shambles that is the New Jungle refugee camp on the edge of Calais.

According to aid groups it’s the worst refugee camp in Europe, even the world, with up to 5,000 refugees and migrants living in squalor, and with not enough drinking water or food to get by.

Neither France nor the UK – the reason they all camped out in the northern port town – has shown no real willingness to improve the situation, because they fear more migrants will come. But as we know now, the migrants are coming whether French authorities like it or not. The readiness of the French government to leave aid organisations to deal with the worsening crisis in the camp is a scar on the country’s human rights record. There's not much sign of the famous principal of fraternity in Calais, although to be fair the government is building a new camp for 2016.

Some extreme industrial action by unions also left a scar on France’s reputation this year.

Here at The Local we often champion France’s culture of protests and strikes to protect workers’ rights and lament that in the UK or the United States that culture appears to have all but disappeared.

But the sight of taxi drivers smashing up Uber cars and lobbing rocks off bridges down onto private hire cabs below wiped out all sympathy we could have for them.

There were also the ferry workers who trashed their ships and perhaps even more damaging, although slightly less violent, was the case of two Air France execs who had their suits ripped off by striking workers.

The images of the two bare-chested men clambering over fences hanging on to the remains of their suits and shirts were beamed around the world and appeared to confirm every stereotype people held about the French.

While the violence of the incident was over played and it distracted from the fact thousands were due to be made redundant, the images were hardly what France needed at a time when it’s desperately trying to boost foreign investment.

Which brings us to the economy, something that experienced another fairly dismal year as it remained pretty much in neutral. The rise of unemployment also showed no signs of slowing, although the government has high hopes for 2016.

The year 2015 also gave the far-right National Front its strongest ever result in an election, when 6.8 million voted for Marine Le Pen and co in the second round of the regional elections. Just as happened in 2014, the party proved it was now a major player on France’s political landscape. That's bad news for anyone who believes the anti-EU, anti-immigration and anti-Islam party will only drive a wedge through French society when it needs to remain united. At least there are no elections next year.

2015 wasn’t even a good year for the country’s national football team.

Its star striker Karim Benzema (pictured below, right) who was meant to lead the line at Euro2016 on home soil, got caught up in a sex tape scandal and has been banished from the team. For a start, the Parisian reactions to both terrorist attacks in the French capital were proud moments for the city and its inhabitants, and it was exactly the kind of response that would have the attackers clenching their fists in frustration.

The was the triumph of the COP 21 climate deal, that you felt couldn’t have happened without the determination of the French hosts to get a deal done.

The French startup scene goes from strength to strength with one US CEO even describing the country as the next Silicon Valley and one French entrepreneur inventing a 'cure' for builder’s crack.

But that’s not all, here’s a full list of the good news from France over the last year.