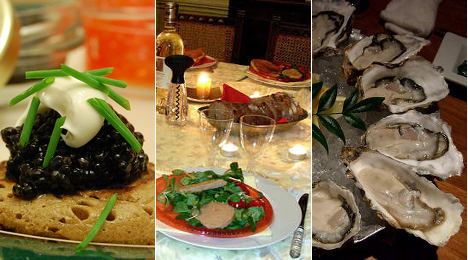 As we all know, the French love their food, so you can imagine the kind of effort that goes into their annual Christmas feast.

The culinary highlight of the French year is not for most families on Christmas Day, but late on Christmas Eve, and traditionally begins once folks have returned from midnight mass.

The feast is called “Le Reveillon”, meaning “awakening” or “wake up”, because it normally goes on until the early hours of the morning.

Whereas Anglos will mostly plump for a roast turkey and stuffing, with roast potatoes, gravy and a few extra trimmings, the French really push the boat out and flash the cash.

Anyway if you fancy ditching the traditional turkey and “waking up” with a French-style Christmas Eve dinner, check out what they will be tucking into with this gallery. (WARNING: You might need your indigestion tablets just to get through to the end)