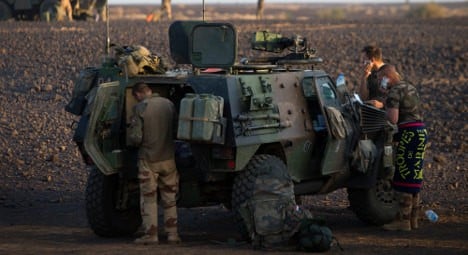 French troops intervening in Mali in January 2013. Photo: Joel Saget/AFP
The French defence ministry said on Tuesday that its Barkhane force killed or captured around 10 Al-Murabitoun jihadists in heavy fighting.
But Mohamed Ould Mataly, a senior figure in the pro-Bamako Movement of Azawad (MAA) militia, said four of his men had lost their lives under French fire, despite nominally being on the same side.
“This weekend, near Meneka, the French army killed four of our fighters,” Ould Mataly told AFP.
“They call it 'collateral damage'. These are our people who have been killed. And what is really serious now is that (they) do not want us to go near the area,” he added.
The MAA is one component of a coalition of armed groups calling itself the “Platform” which supports the central government as it attempts to enact a peace deal to end decades of conflict.
“After introducing ourselves and welcoming Barkhane (French) forces as friends, a Platform outpost came under fire from these forces, causing several deaths and injuries and leaving others still missing,” a statement from the coalition said.
“The Platform, while condemning religious extremism, attacks and terrorist provocations of all kinds, calls on international forces to act with discernment in order to avoid confusion and any further deterioration of an already difficult situation,” the statement said.
A French military source, who asked not to be named, denied the coalition's accusations when questioned by AFP.
Divided into rival armed factions, plagued by drug trafficking and at the mercy of jihadism, Mali's desert north has struggled for stability since the west African nation gained independence in 1960.
On Monday the government reimposed a nationwide state of emergency for the last 10 days of the year to head off any terror threats.
Northern Mali fell under the control of jihadist groups linked to Al-Qaeda in 2012.
The Islamists were largely ousted by a French-led military operation launched in January 2013, but large swathes of Mali remain lawless and prone to attacks.