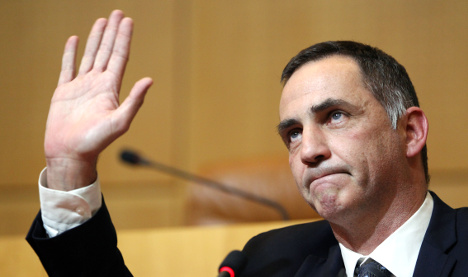 Nationalist politician and winner of the regional elections in Corsica Gilles Simeoni
“This is the culmination of 40 years of struggle,” said Jean-Pierre Susini, a veteran of a violent insurgency that ended last year.
“I have always called for independence but after 200 years of (French) colonialism… the nationalists have an enormous amount of work to do,” said Susini, 67, who lives in the small village of Luri among the mountains of northern Corsica.
Susini used to escape to these hills after taking part in attacks by the National Liberation Front of Corsica (FNLC), which led a brutal campaign of bombings and political assassinations from 1976 until it laid down its weapons in June 2014.
But that is the past — today's nationalists are trying a peaceful approach to power.
Lying just off the coast of Italy, the island of 320,000 inhabitants known for its stunning scenery and as the birthplace of Napoleon, was annexed in 1768.
Now it has followed Scotland and the Spanish region of Catalonia as the latest European territory to elect a nationalist government after regional polls on December 13 handed power to a coalition that includes politicians campaigning for outright independence.
“France doesn't like Corsica. We're fed up with being governed by people who are racist with their subsidies, their judicial decisions, even with football,” said one fired-up supporter, 35-year-old Karine Pellegrini, in the island's economic hub of Bastia.
“When Corsicans play, the refereeing is never fair,” she added in disgust.
She looks forward to new nationalist symbols such as Corsican identity cards, and progress on the long-standing demand for political prisoners from the independence movement to be transferred to jails on the island instead of the mainland.
'In peace and democracy'
But as with other nationalist campaigns around Europe, the new leaders of the movement marry these emotional appeals with more practical concerns.
Corsica's wildly popular new leader, 48-year-old lawyer Gilles Simeoni, has put the emphasis on day-to-day worries about unemployment, corruption and waste collection.
Simeoni, who was previously mayor of Bastia in northeastern Corsica, takes a middle line on independence, saying the question can be decided later while demanding greater powers and subsidies from the mainland.
“Corsicans will decide,” he told local newspaper Corse-Matin this week.
“If they want independence, no one will stop them taking it. But conversely, if they don't want it, no one can presume to impose it on them.”
He has become the island's most popular politician in part because he has moved the nationalist movement away from its violent past.
“The Corsican people… will construct and realise their destiny in peace and democracy,” he said last week as he took over the island's executive council.
Some of Simeoni's allies are less cautious in their demands.
Jean-Guy Talamoni, the head of the independence party, made his inauguration speech at the regional assembly last week entirely in Corsican.
It was a jolt on the mainland, where everyone's attention had been fixed on the rise of the far-right National Front, and the Corsican race had been largely ignored.
Talamoni, 55 and also a lawyer, has described the new government as “the first national Corsican government since the 18th century” and launched straight into demands for the release of political prisoners — which he said numbered 25.
“No one can oppose this popular will,” he told cheering supporters, who chanted “freedom” and waved the island's distinctive flag featuring a man with a bandana.
“By voting for the nationalists, the Corsican people have said that Corsica is not just a piece of another country, but a nation, with its own language, culture and political tradition,” said Talamoni.
'Not Scotland, not Catalonia'
Paris has responded softly, calling for a “serene, constructive and balanced” dialogue with the newly elected nationalists.
While two-thirds of Corsicans are in favour of a referendum on independence, many recognise the island would struggle on its own.
“Corsica is not Scotland with its oil, nor Catalonia with its GDP,” France's L'Express magazine wrote this week.
The coalition has just two years to prove itself, since a reorganisation of the local government means Corsicans will return to the polls in 2018.
“We have only two years before us,” said Susini, back in the village of Luri.
“We must not disappoint, otherwise the valets of colonialism will take back control.”