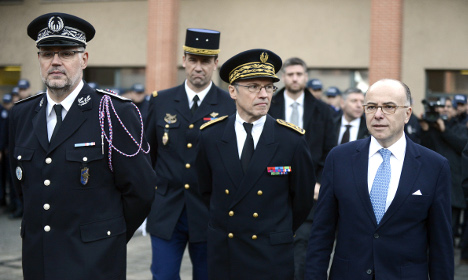 Interior Minister Bernard Cazeneuve announced on Wednesday that a terror plot to attack Orléans had been foiled earlier this month by France’s internal intelligence services the DGSI.

It’s the tenth terror plot to be thwarted on French soil since 2013, the minister said.

He revealed certain details of what was planned and who was behind the plot.

What kind of attack was planned?

Cazeneuve said the attack was planned to strike against representatives of law and order. Sources close to the investigation have since revealed that the targets were a military barracks and police stations from the national police and the gendarmerie military police.

“One of the two arrested men has admitted they were planning to carry out against soldiers, police and representatives of the state,” Cazeneuve said.

“It is believed they wanted to launch a gun attack on the targets, however we don’t know when the pair were planning to strike. Who were the suspected plotters?

Police arrested two men, aged 24 and 25-years-old on December 15th and the 16th. The pair were presented before a judge on Saturday December 19th, charged with terror offences then remanded in custody.

According to police sources the pair both have a history of petty crime such as driving offences or theft. One police source described them as “two little delinquents with criminal records for minor crimes”.

A police source told Le Parisien newspaper that the older of the two men was known to intelligence services for having been radicalised.

One of the arrested pair is believed to be from Morocco originally, while the other is from Togo.

In raids of their homes police found violent Isis propaganda videos as well as material that showed the pair had committed allegiance to the Middle East terror group.

“It’s hard to believe,” a friend of one of the pair told Le Parisien. “When he was younger he was a loving boy. He used to do Ramadan but he wasn’t someone you would call religious.”

How did police detect the plot?

According to sources the pair come on the radar of intelligence services when they attempted to buy arms – specifically assault rifles and Kalashnikovs.

They came to the attention of DGSI back in August and had been placed under surveillance since then. Apparently they received information from an anonymous source that several young people from in an around Orléans were in contact with a French jihadist from the area who had left for Syria.

They were arrested the moment they tried to buy the guns. It has also emerged they were trying to strengthen their numbers by hoping to persuade others in their entourage to take part in the attack.

“These arrests are the result of meticulous work by our intelligence services,” said the interior minister.

Did they have any help?

As in most of the other recent foiled terror attacks in France the suspect is believed to have been in contact with a jihadist in Syria – a possible commander.

This jihadist, a French national, is known to France’s intelligence services, reports say.

It has also been reported the pair received transfers totalling €4,000 from Syria, presumably to help them buy the arms.