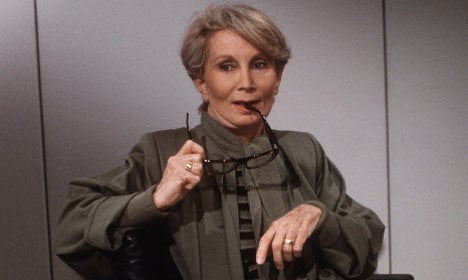 By the end she lived as a recluse on the French Riviera, where she rented a small apartment and survived on a modest pension.

But in another life, Madame Claude, whose real name was Fernande Grudet, was anything but reclusive.

She became known as the most famous French procurer and at the peak of her powers in the 1960s she was the head of a exclusive French network of call girls who worked for dignitaries and civil servants.

Madame Claude had acted as an agent for the French Resistance during World War Two, but moved into high-end prostitution years after the war.

She set up her brothel at 32 rue de Boulainvilliers in the chic 16th arrondissement of Paris.

Among the clients of her call girls were politicians, police chiefs and gangsters. (Fernande Grudet, seen in the company of her lawyer at a court in Paris in 1986. Photo: AFP)

Stadiem had interviewed Madame Claude in the 1980s but his planned book remained unpublished.

After talking to her former clients and staff Stadiem made his findings public in the article with the subheading “Behind Claude’s Doors” in Vanity Fair magazine.

According to Claude, murdered US president JFK was a regular client and once asked for a prostitute who looked like his wife Jackie “but hot”.

JFK was the not the only famous client to have frequented the brothel, Stadiem revealed that former Libyan dictator Muammar Gaddafi and Oscar winning actor Marlon Brando were also regular visitors during the 1960s and 1970s.

“There are two things that people will always pay for, food and sex. I wasn't any good at cooking,” Claude is quoted as saying.

Stadiem also claimed that the CIA once hired Claude’s “swans” as she referred to her call girls, to keep up morale during the Paris peace accords of 1973, which brought to an end US military involvement in Vietnam.

The madam also claimed famous painter Marc Chagall would regularly show up to paint nude portraits of the woman.

But it wasn’t all glamorous for the brothel owner.

In 1976 French judge Jean-Louis Bruguière took on her network of call girls and began dismantling it.

That move prompted her to flee to the US to escape the French tax man.

Convinced she was safe from prosecution she returned to France in the 1980s but was sentenced to four months in prison.

When she left prison she was intent on setting up a new prostitution organization but found herself hauled before the court again in 1992 and was once again handed a jail sentence for procuring.

The history of Madame Claude has inspired many writers. Her life was the basis of the 1977 feature film, “Madame Claude”, directed by Just Jaeckin, and starring Françoise Fabian. She died in Nice on December 21st.