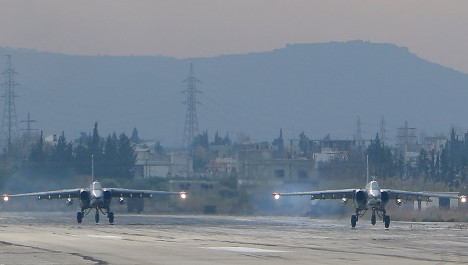 Russian jets take off for a bombing mission in Syria. Photo: AFP

“We have agreed to strengthen our exchange of military information, both on the strikes and the location of the different groups (in Syria),” French Defence Minister Jean-Yves Le Drian said following talks with Russian counterpart Sergei Shoigu.

“Our intelligence services will strengthen their already existing ties, which require increased cooperation.”

Le Drian said they had identified a method to assess the state of IS and other “terrorist groups” following air strikes conducted by both the Russian and French air forces.

“This is not being allied, this is coordinating,” Le Drian said. “The goal of these information exchanges is to assess the scope of actions that can be considered.”

The two sides also agreed to share intelligence on foreign fighters having joined the ranks of jihadist groups in Iraq and Syria, a figure that has more than doubled since last year to at least 27,000, according to a recent report by an intelligence consultancy.

Russia's federal security service said last week that nearly 2,900 Russians are fighting or have fought with the IS group in Iraq and Syria. (French Defence Minister Jean-Yves Le Drian gestures as he talks during a briefing at the French embassy in Moscow on December 21, 2015. Photo: AFP)

The Russian defence ministry said in a statement Monday night that French army chief of staff General Pierre de Villiers would visit Moscow “in the near future” to maintain military contacts between the countries.

Western nations have complained that Russia is primarily bombing Syrian rebels, including moderates, opposed to the regime of President Bashar al-Assad, rather than targeting IS jihadists.

France recently deployed its aircraft carrier Charles de Gaulle to the Gulf, with 26 bombers on board, for operations against IS in Iraq and Syria.

Other aircraft are also stationed in Jordan and the United Arab Emirates.

The defence ministers' talks follow a visit to Moscow last month by French President Francois Hollande, when he sought support from Russian leader Vladimir Putin for increased action against IS in the wake of the terrorist attacks in Paris.

The two leaders agreed to “intensify” and “coordinate” attacks, mainly by targeting the transportation of the oil products that finance the group and through the exchange of intelligence.

Russian air strikes on IS have since increased, but 80 percent of their attacks remain on Syrian rebels, according to French military sources.

Monday's talks were only the second bilateral meeting between Le Drian and Shoigu, as relations between the two ministers were suspended after Russia's annexation of Crimea from Ukraine in March 2014.