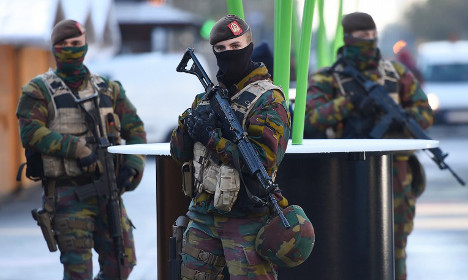 Belgian police have arrested a total of five people including two brothers in a series of raids in connection with last month's Paris attacks, prosecutors said on Monday.

Police arrested the two brothers and a third person in a house raid in central Brussels on Sunday, while two others were detained in a separate search in a suburb on Monday, the federal prosecutor's office said in a statement.

Special forces and federal police were involved in the raid  on the brothers' hmewhich lasted around five hours and took place close to the city's popular tourist area, authorities said.

“They have been taken in for questioning,” Eric Van Der Sypt, spokesman for the federal prosecutor, said of the men, but gave no further details about them.

However he confirmed the detained suspects did not include not fugitive Salah Abdeslam, who is one of Europe's most wanted men over his alleged involvement in the November 13 attacks that left 130 dead in the French capital.

Federal prosecutors will release a statement Monday with further details on the arrests, the spokesman said.

The search took place in a building on the outer limits of Molenbeek — an area with a large immigrant population — and less than a kilometre away from Brussels' central Grand Place square, one of the city's most popular tourist
sites.

Belgian police are still actively looking for 26-year-old, Brussels-born Abdeslam, suspected of having played a key role in the Paris attacks and understood to have returned to the Belgian capital the day after the bloodshed.

An international arrest warrant is out on Abdeslam, who lived in Molenbeek.

A source close to the Belgian investigation told AFP earlier Sunday that Abdeslam made it past three police checks when friends drove him from Paris to Brussels in the hours after the coordinated gun and suicide attacks.

Belgium has so far arrested eight people on suspicion of involvement in the terror assaults, which have been claimed by the Islamic State jihadist group.