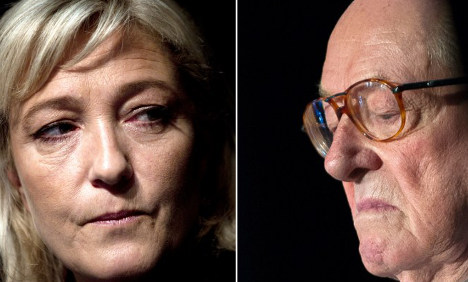 Marine and Jean-Marie Le Pen could face up to three years in prison. Photo: AFP

“There is a serious doubt about the comprehensiveness, accuracy and sincerity of their declarations owing to the obvious undervaluation of real estate assets” held by the two Le Pens, said the High Authority for
Transparency in Public Life in a statement.

The body also mentions the failure of Jean-Marie Le Pen, the firebrand founder of the far-right party, to declare certain property.

The High Authority “ruled it necessary to alert the financial prosecutor to these facts, which could represent criminal offences,” said the statement.

Both Jean-Marie Le Pen and his daughter Marine, who took over leadership of the National Front in 2011, are lawmakers in the European Parliament and as such have to publically declare their wealth.

The financial body estimates both Le Pens underestimated their wealth by a third – a figure of about €1 million for Jean-Marie and hundreds of thousands of euros for Marine.

Jean-Marie Le Pen, 87, is accused of failing to declare a Swiss bank account and gold bullion, which already prompted a preliminary investigation into tax fraud in June.

For Marine Le Pen the report is the latest chapter in a series of legal woes.

In October, the National Front (FN) chief refused to show up for a court appearance over charges that her party had conspired in fraud during the last parliamentary election in 2012.

Le Pen told news agency AFP in a written statement that she refused to appear as her party had filed a complaint against the judges several days earlier.

She did not give details of the complaint, but a source with knowledge of the affair said Le Pen had accused the judges of political bias.