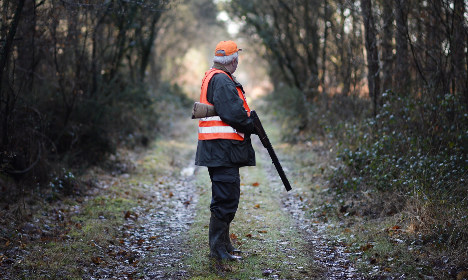 The grieving widow of a man killed by a shot to the head in a hunting accident in the French Alps has spoken out accusing the hunters of “killing” her loved one.

In a moving message that has been shared nearly 30,000 times on Facebook, the woman named Mélanie described the moment her husband, the father of their two children, was killed while they were out for an afternoon jog.

The pair were trail running on Saturday December 5th on the slopes of Mount Semnoz in the French Alps.

Her husband Gael Lavy, was shot in the head by a 20-year-old hunter, who apparently mistook him for a boar.

But in her Facebook message Mélanie slams those responsible for her husband’s death, in a message that will further enhance the arguments of those calling for a crackdown on the sport.

“It has been many year’s since I have written anything on Facebook, but now it’s different…

“It was me who held him in my arms for 15 minutes before the paramedics came, his head blown apart.

“I remained alone for five minutes screaming before a hunter approached me, even though they stood 50 metres from us.

“They took the time to get their own version of events straight.” “We live at the foot of the Semnoz and have enjoyed trail running for many years. We know the hunting periods, the signs and the rules…

“On this Saturday December 5th, we did not come across any sign on the paths we took.

“We did however cross paths with a hunter around 100 metres before the shot was fired. We said hello to him but he did not respond, instead he turned his back, rather than making us aware that there were six or seven hunters higher up the track.

“We were speaking loudly, I was dressed in pink and blue, the ground was open and we were about 10 metres from the road that goes up to Semnoz.

“One minute later, I heard a terrible shot and I turned around to see my husband was on the ground, the bullet had blown his jaw apart

“Hunting is not a game.

“My husband was 1.82m tall and weighed 83 kilograms, and looked nothing like a wild boar.

“He was handsome, he had two little girls. We were happy.

“What are we meant to do now?”

The incident has added weight to those who want restrictions placed on hunting, as is the case in most European countries.

Mark Giraud from the organisation ASPAS, which has been leading the campaign told The Local that France had to act after the latest in a sorry list of hunting accidents in the country.

“There are around 20 deaths in hunting accidents each year and about 300 injuries, but France is the only country in Europe where hunting is not banned around the country on at least one day of the weekend. “The hunters say there are deaths in every sport, but going out for a walk or a run is not like mountain climbing, where the participants take their own risks.

“It is a leisure activity. It’s not normal to be killed.”

Giraud complains that the pro-hunting lobby in France is still powerful and despite 300,000 names on a petition calling for a ban on Sunday’s, nothing has been done.

The government, aware that rural France is already suffering from a farming crisis and high unemployment, doesn’t appear to want to spark a new controversy.

But Giraud says even a tightening of the rules around drinking could help prevent deaths.

'At the moment they don’t have the power to carry out alcohol tests on hunters, so it is basically legal in France to hunt when you’re drunk,” he said.

“But when you have a rifle in your hand, you are in charge of a lethal weapon, just like car drivers. Yet we have laws against drink-driving.

“It should be the same for hunters.”

André Mugnier, president of the local hunters federation in Haute-Savoie said the problem did not lie with hunting, but with those who don't respect the rules.

“We have safety measures in place and training is carried out, but in this case it appears that the rules were not followed.

“It's been 30 years since we had an accident like this in our area and in France there are 200,000 people who parake in hunting, but there are only 12 to 14 deaths a year.

“After this incident we need to step back and look at things again. If you have a road accident, you don't just close the road, we have to respect the rules.”

Hunting is not allowed on Wednesday's and Friday's in the Haute-Savoie but Mugnier did not accept a ban needed to be in place at the weekend.

“Wednesday's is a day when many children were off school ,that's why it is not allowed. We are in a part of the country that attracts tourists and visitors on every day of the week.

“We need a system whereby everyone can enjoy and make use of nature. We need to think what needs to be done.”