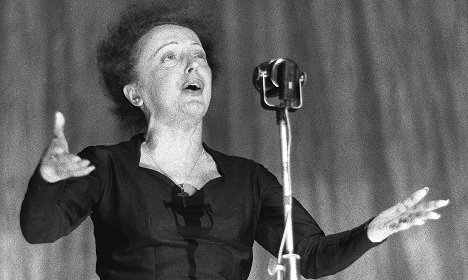 “She remains a personality who incarnated a past Paris.” Photo: STF/AFP

“You have to keep going,” said Malene Lamarque, a chanteuse who belts out Piaf favorites every Tuesday at Le Vieux Belleville, a cabaret bistro popular with both tourists and locals in the northern Paris neighborhood where the “Little Sparrow” grew up.

Piaf was among many famous performers to have graced the stage of the Bataclan concert hall, where Islamist gunmen shot dead 90 people on Nov. 13 in the worst of a string of attacks on Parisians enjoying a Friday night out.

In the aftermath of the attacks, her songs about the city, and its lot of revelers, philosophers, beggars and lovers, were played and shared over and over in homes and on the airwaves.

In a show of solidarity with France, Piaf’s most famous song, “La Vie en Rose,” was reprised by an emotional Madonna at a show in New York, with only a ukulele for accompaniment.

Piaf’s ballads had a “social function, they gave pleasure, joy and togetherness, but they also consoled,” said Lamarque — qualities they still enjoy today.

Tributes to the little woman with the big voice kicked off Saturday with a Mass and a brief concert in Saint-Jean-Baptiste de Belleville, the neo-Gothic church where she was baptized.

Among those who remembered her in song was her stepdaughter Jacqueline Boyer, winner of the 1960 Eurovision Song Contest.

Later, a group of around 40 people laid a wreath on her grave in Pere-Lachaise cemetery in north Paris.

The homages will continue into the new year at venues humble and grand, reflecting Piaf’s rise from singing street urchin to world-class chanteuse.

“She remains a personality who incarnated a past Paris,” Julie Mirasola, a 40-year-old lifelong fan, told AFP at an exhibition dedicated to Piaf at the Bibliotheque Nationale de France earlier this year.

Born on Dec. 19, 1915, into a circus family, to a singer mother and acrobat father, Piaf had it hard as a child, living in a bordello and being partly raised by prostitutes. She started out singing in the street and cafes during her father’s performances before striking out alone as a teenager.

A Paris nightclub owner discovered her at age 19 and put her on stage, and on the path to stardom.

She helped some Jewish friends, but showed no hostility to Gestapo officers she passed in the building where she stayed, and in 1943 she visited French prisoners of war in Germany.

Although initially seen by some as a traitor, testimonies — some probably embellished — eventually cleared her after the war of being a collaborator.

After the war, a love affair — and musical partnership — with singer Yves Montand ensued and her circle of friends — both of high and low station — grew along with her fame. She helped several singers, including Charles Aznavour, and in 1947 made the first of several visits to the United States.

She starred in several movies and the advent of television fuelled her career.

After a tumultuous love life — her lovers provided the inspiration and sometimes co-penmanship of several of her songs — Piaf married a singer, Jacques Pills, in 1952 and divorced him five years later.