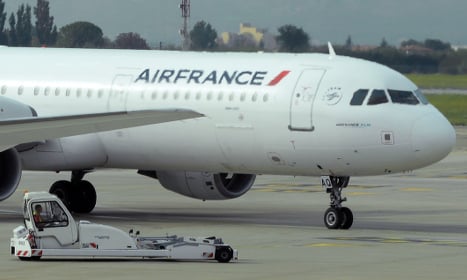 Bomb experts from the Navy and the CID were called in to check the package on the plane. Photo: Boris Horvat/AFP

It landed at Moi International Airport, Mombasa, before 1am local time (2137 GMT).

“It requested an emergency landing after a device suspected to be a bomb was discovered in the lavatory, an emergency was prepared and it landed safely and all passengers evacuated,” police spokesman Charles Owino said.

“Bomb experts from the Navy and the CID were called in and took the device which they dismantled,” he said.

However, Air France chief executive Frederic Gagey later said that it had been a “false alarm”.

“After analysis it has been indicated that it was a false alarm,” said Gagey of the item that was found in the toilet cubicle on board the plane flying from Mauritius to Paris

“All the information we have at this stage shows that the object was not capable of causing an explosion that would damage the plane but was rather a mixture of cardboard, pieces of paper as well as a timer,” he said.

France is on high alert after jihadist attacks in Paris in November left 130 people dead, and is one of many countries taking extra security precautions.

Islamic State jihadists who claimed responsibility for the Paris attacks also said they were responsible for downing a Russian jet in October after smuggling a bomb onto the plane, killing all 224 people on board.