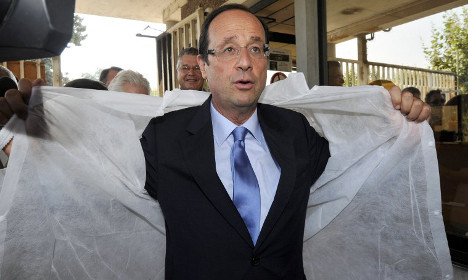 Hollande may be struggling to turn around the French economy and suffering in the popularity polls but he certainly has something going for him.

The president, who is often mocked for his appearance in France, has been named among the best dressed figures of the year in 2015, by the UK’s Financial Times newspaper.

In the annual rankings Hollande was placed 13th, ahead of Justin Bieber, British actor Colin Farrell and even Prince Harry.

It reflects a major upturn for the under-fire French president who the Financial Times acknowledged was “once mocked for his ill-fitting suits and ineptness at tie-fastening”.

Indeed there is even a website called François Your Tie, which is dedicated to observing the position of the president’s tie, known to swing to the right more often that not.

Nevertheless “the president of France has done much to quell his critics since taking office in 2012,” writes the newspaper.

The French head of state was complimented on being impeccably dressed whilst having to deal with terrorist attacks in Paris or summits to save the Greek economy.

“This year, Hollande has navigated the political tide with panache, steadying tempers at the all-night Greek summit in July and nerves in the face of two terrorist attacks in Paris, while looking impeccable in a tailored suit and pristine shirt.

“There’s much to commend his habit of matching his suit and his tie.”

The ranking almost sparked guffaws in the French press with L'Express newspaper summing up the reaction with the headline: “François Hollande among the best dressed personalities in the world. Yes, yes”.

To see the full rankings click on the picture below.