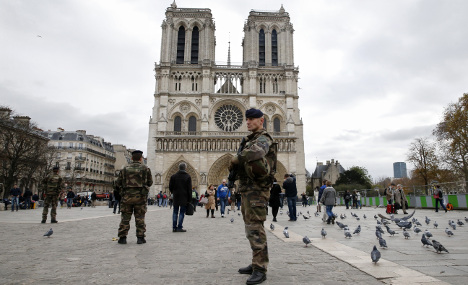 With France still very much on edge after the November 13th terror attacks in Paris, authorities are concerned terrorists could now strike a blow at the country’s churches over the festive period.

Attacks on Christmas masses would have “huge symbol value” for terrorists, France’s interior ministry warned police chiefs in a memo on the issue, Europe 1 radio reports.

In the three-page note, interior minister Cazeneuve said police patrols would be stepped up over the period.

But he also advised police forces to get in contact with church authorities and tell them to look out for unusual behaviour including the presence of suspicious cars parked near churches.

Parishes have also been advised to make churchgoers open their coats and jackets before they enter churches especially for midnight masses on December 24th and on December 25th.

Some 500 such services are set to take place in Paris alone.

“It's obviously mainly to reassure people, but the government can't afford not to step up security, because if something happened they would heavily criticized,” French terrorism expert François Bernard Huyge told The Local on Friday.

As a result of the ongoing terror threat and fears around churches the attendances at masses over the festive period in France are predicted to see a huge fall.

As part of his message to police, Cazeneuve also mentioned foiled terror attacks on Paris churches in April. The suspect was detained after apparently having shot himself in the leg by accident, just as he was preparing to carry out the attacks.

In the wake of that foiled attack, French prime minister Manuel Valls said: “Protection of religious sites will be guaranteed”.

“Christians and Catholics in France were targeted. They must be able to go to mass in perfect peace,” he said.

But church authorities admitted protecting the country's 40,000 or so places of worship would be a difficult task while Jean-Charles Brisard, the chairman at the Paris-based Center for the Analysis of Terrorism, told the Local churches were “soft” and “easy” targets.

France declared a state of emergency after the November 13th attacks in Paris in which 130 people were murdered by jihadists thought to belong to the terror group Isis.