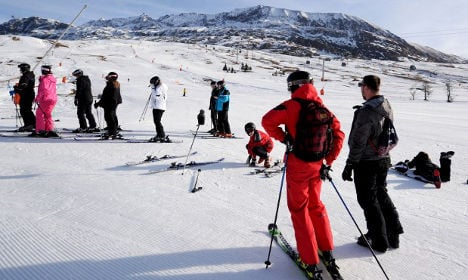 While plenty of people have delighted in France’s mild autumn, ski resort owners and slope lovers alike are stamping their feet with frustration.

And there's no snow forecast before Christmas either – news which is unlikely to please people flying in to the French slopes over the coming days.

In fact, the only half-way decent snow conditions to date this season arrived in November and even that colder spell left the southern Alps and Corsica bereft of the sort of snow skiers long for.


Snow conditions in France are far from ideal.

In the northern Alps, meanwhile, snow conditions are described as “weak” or “very weak”.

In some places, however, artificial snow will allow resorts to offer a modicum of relief. That’s the case at the L'Alpe d'Huez station in the Alps, where 30 of a total 130 pistes are now skiable thanks to the hard work of snow cannons.

The number of pistes open to the public is set to increase to around the 65 mark in time for the Christmas holidays.

But ski resort director Christian Reverbel has warned people not to go off piste, with snow not covering rocks in those areas.

Elsewhere, the Pyrenees are faring slightly better than the Alps with snow cover of around 30cm above 1,800m on north-facing slopes. That is as much as 75cm above 2,500m

But Corsica and in the Vosges there are is no snow, while the only snow in the Massif Central is to be found on some north-facing slopes at altitudes about 1,400m

There is a silver lining thought: snow conditions can change “quite quickly” at this time of year, and [current conditions] don’t mean it’s going to be a bad year, engineer Cécile Coléou told Le Parisien recently.

Laurent Reynaud from Domaine Skiables de France told The Local that most stations frequented by British tourists this winter will be open, but they shouldn't forget one vital piece of equipment.

“They'll need to bring their suncream,” said Reynaud. “Yes we could do with some snow, but the positive news is that the weather is beautiful.”

Reynaud said most stations about 1,800 metres will be open even if not all the pistes are.