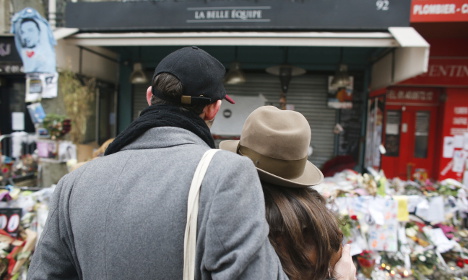 A couple at the makeshift shrine outside La Belle Equipe, which was targeted in the November attacks. Photo: AFP
A total of 130 people were killed in the November 13th terror attacks in Paris, and their families have already seen payouts totalling €6.7 million, Justice Minister Christiane Taubira told Le Parisien newspaper.
She predicted that the compensation figure “could reach a total of €300 million”.
Some €771,000 has also been paid out to the those injured in the attacks and to their families.
The cash comes from a fund set up by the government almost 20 years ago specifically for terror victims.
Taubira pointed out that the government had also set up a hotline for families of the victims to help them get access to the compensation fund.
The lines already saw around 11,000 calls in the two weeks since the attacks alone, including from witnesses who had suffered psychological stress from the attacks.
Le Figaro noted that the government appeared to be much more responsive to the November attacks compared to those of January, when 17 people were killed by Islamist terrorists.
Around 250 cases have been opened, with compensation paid out estimated to be between €10 million and €20 million.