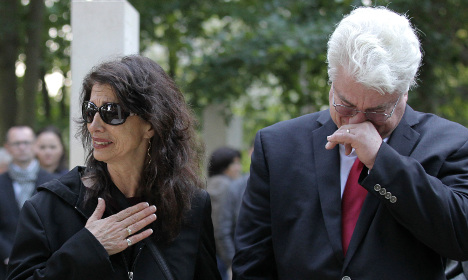 Diane and John Foley angered by Marine Le Pen's publication of a photo of their son. Photo: AFP

Le Pen posted the image, plus two other graphic photos, in response to a journalist whom she accused of likening her party to the jihadist group.

In each one the victims' faces could be recognizable to those who knew them.

“Our family was informed this morning that Marine Le Pen, a French politician, tweeted a shamefully uncensored picture of our son,” John and Diane Foley said in a statement.

“We are deeply disturbed by the unsolicited use of Jim for Le Pen's political gain and hope that the picture of our son, along with the two other graphic photographs, are taken down immediately,” they said. Mainstream media largely refrained from showing any potentially disturbing or gruesome photos from the incident.

“As we have said before, our focus is on Jim's life and all the good that he did in the world,” his parents said.

“We choose to use our tragedy to improve the world around us, and Le Pen's actions go against everything Jim and the James W. Foley Legacy Foundation stand for.”

As anger and outrage grew on Thursday, the under fire Le Pen eventually withdrew the pictures of Foley from her Twitter feed, however two other Isis propaganda pics remained.

“I did not know it was a photograph of James Foley. It can be accessed by anyone on Google. I learned this morning that his family has asked for it to be removed and of course I took it down immediately,” said Le Pen. The prosecutor's office in the western Paris suburb of Nanterre told AFP it had launched an investigation into “the dissemination of violent images” over the National Front (FN) leader's series of shock tweets.

Interior Minister Bernard Cazeneuve alerted the police to look into the tweets “as they do every time these photos are published”.

The photos are “Daesh propaganda and are a disgrace, an abomination and an absolute insult to all victims of … Daesh,” said Cazeneuve.

FN lawmaker Gilbert Collard also tweeted a picture of an Isis victim, albeit one that was far less graphic than those posted by Le Pen.

“We are only showing the hate-filled ignominy of those who assimilate us with killers,” Collard, who was also placed under investigation, said by way of explanation.