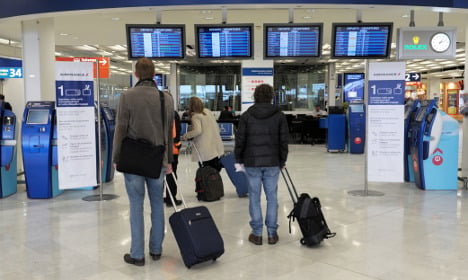 The Orly airport in Paris. Photo: AFP
Soon after the November terror attacks in Paris, management at Orly airport rounded up several male staff members, all of them Muslim and all of them bearded, reported Le Parisien newspaper.
The men were all informed that with passengers on edge, it would be appreciated if they could all trim their beards to adhere to strict grooming policy.
Most of the men complied, but two did not, and launched discrimination complaints. They were both fired just days later.
One of the men, a 28-year-old called Bachir who had worked as a security guard for five years, said his beard had attracted negative comments from colleagues before, with one supervisor “offering to bring in a lawnmower”.
But he claimed that his beard “was for fashion, in a hipster style… and not for religion”, he told Le Parisien.
He also said that he had suffered disparaging comments about his Muslim faith too.
A spokesperson from the company that the men worked for, Swedish security firm Securitas, told AFP that Bachir had been laid off for “serious breaches” of the company's rules.
The man's beard was “an additional, but not essential factor” in his dismissal, which was also related to a series of absences, lateness, and too much “chattering” at work.
While it may be impossible to know for sure exactly why the man was fired, the firm hasn't had the best reputation with laying off employees in the past, with another ex-worker coming out of the woodwork since Thursday's story made headlines across France.
34-year-old Bechir told BFM TV that he suspects he was also fired by the company for his beard.
He was officially told that he lost his job in June – long before the terror attacks – because he was “medically unfit”.
A lawyer has taken on the case of both Bachir and Bechir, telling BFM TV that he is concerned that some companies have turned to “paranoia” since the attacks.
Security has heightened, meanwhile, at both the Orly airport and Charles de Gaulle north of Paris.
Secure-zone clearance was withdrawn at the weekend for nearly 70 people working at two airports following the November 13th terror attacks on the French capital.
This means that 70 fewer people are allowed to enter the secure zones of the airports, where work is carried out by baggage handlers, aircraft cleaners and suppliers.
The move came after a mass screening by the Aeroports de Paris, and that the 70 withdrawn badges were “mainly for cases of radicalization”, the company CEO told AFP.