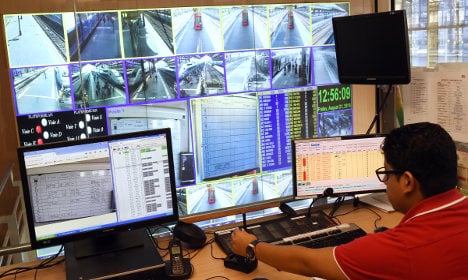 Software that monitors suspicious behaviour and luggage could eventually be integrated into 40,000 surveillance cameras across France, a railway firm said on Wednesday, as the country tightens security after last month's deadly Paris attacks.

Public transport authorities are looking to technology to better predict warning signs among passengers in the wake of the shootings and bombings that left 130 people dead.

“We are testing to work out what flags up people with a negative intention, an aggressor, or a groper,” he said, but added what was also being ascertained was the level of “social acceptability” of such software.

Cameras that detect packages left unattended for too long were also under evaluation, Volant said, adding the experiments had the full backing of the law.

Another strand of SNCF's strategy was the possibility of equipping its staff with wearable cameras to identify fare dodging or suspect behaviour, and in the spring it will launch an app that allows passengers to raise an alert from their smartphones.

A law is also under consideration in France to give SNCF security agents powers to perform security pat-downs and search passengers' luggage.

France will install security gates at stations in Paris and Lille for the Thalys cross-Europe rail services by December 20 in one of a raft of measures introduced after the Paris attacks, minister Segolene Royal said Tuesday.

However questions have been asked about their worth because the security gates are not being installed at the other end of the lines for passengers travelling from Belgium, Germany and Holland to France.

A Thalys train from Amsterdam to Paris was attacked by a heavily armed man in August, but he was overpowered by passengers.

The high-speed Thalys service links Paris with Lille in northern France, the Belgian capital, Brussels, Amsterdam in the Netherlands and the western German city of Cologne.

Passengers boarding those trains do not currently have to pass through security checks, unlike for the cross-Channel Eurostar train services to Britain, which have airport-style security.