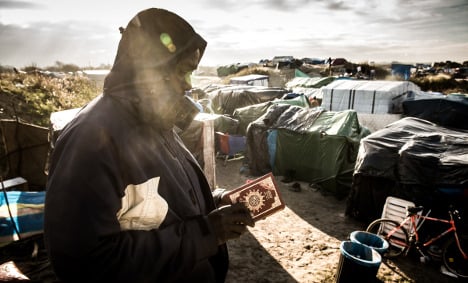 A refugee in Calais. Photo: AFP
It is France's newest and most unwanted town, with its own market, makeshift restaurants, church, library and even theatre.
Now Calais' “Jungle” has its own set of postcards.
Migrants living in the notorious camp on the country's north coast have produced a series of “Wish we weren't here” cards to sell to tourists.
The poetic and often humorous scenes include refugees cartwheeling on the beach as well as police teargassing the camp, and an abandoned boot on the rail line leading to the Channel Tunnel captioned, “Cinderella has a brother.”
The refugees behind the idea told AFP they wanted to show how they are trying to make the best of life in the mud of the shanty town as they bide their time hoping to find a way to get to Britain.
“We photograph the beautiful things as well as the suffering,” said Syrian teacher Baraa Halabieh, 31, who fled his home in Hama earlier this year for the quagmire of the former rubbish dump on the outskirts of the port, now home to 4,500 people.
“I want them to be postcards to (the) future,” he added. “I dream of a time when people will drive past here and the Jungle will be gone and people will never believe that such a terrible place existed. All that there will be will be these postcards.”
The postcards will go on sale Thursday, priced one euro ($1.09), a day ahead of International Migrants Day. Growing hostility
With Calais' mayor – who this month banned migrants from using the town's swimming pool – complaining that bad publicity about the “Jungle” had destroyed its tourist trade, the postcards make a point of showcasing the town's breathtaking beaches.
In a nod to the British street artist Banksy, who secretly visited the camp last week, one card subtly features an image he left behind on a wall near the beach showing a child with a suitcase peering longingly at the British coast through a telescope.
Although Banksy graffiti can fetch hundreds of thousands of dollars on the art market, the image has since been covered up by the town's authorities.
Some entrepreneurial refugees have even begun charging spectators five euros each to see the image painted inside the camp, covering it in a blanket until they're given the money.
Photographer Severine Sajous, who set up the Jungleye group of refugees to document life in the camp on Facebook, said she hoped to persuade the town's tourist office to stock the postcards.
“The idea is meant to be a bit funny of course, but it is also to open people's eyes to what life is like here. Lots of people project their darkest fantasies onto the Jungle.”
With hundreds of migrants being rounded up by police in recent weeks as French authorities clamp down on the camp, many are fearful about venturing outside the camp during daylight, she said.
Local hostility to the migrants has been growing, with the anti-immigrant National Front (FN) taking nearly half the votes in Calais in regional elections last weekend, their highest score in France.
With fewer and fewer migrants succeeding in making it to Britain, the camp with its barber shop, bars, Afghan biryani houses, Eritrean Orthodox church and Muslim prayer rooms, has taken on a semi-permanent air.
Nineteen refugees from the camp have died in the attempt to reach Britain since June, with one postcard showing a protest in the camp after a 16-year-old Sudanese boy called Joseph was killed earlier this month trying to get onto a lorry.
To mark International Migrants Day, refugees will also conduct tours of the camp.
Another Banksy graffiti in the camp of former Apple boss Steve Jobs carrying a bin bag of his personal possessions will be part of the tour.
“We're often led to believe migration is a drain on the country's resources but Steve Jobs was the son of a Syrian migrant,” Banksy said in a rare public statement.