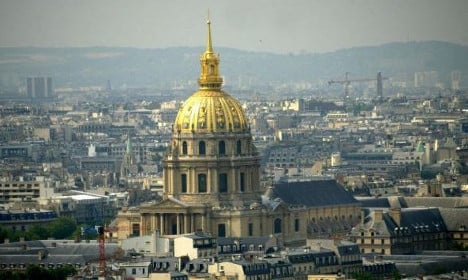 A policeman with the gendarmerie fired around ten shots when the driver refused to stop and then forced his way through the one of the main entrances of the Hôtel des Invalides on Rue Grenelle, according to unconfirmed reports in I-tele.

The man's car was immobilized and officers swooped quickly to arrest the driver, who was not believed to have been armed.

For the moment police have no idea of the motive and no injuries were reported. It is not believed he was known to police.

Initial reports suggest he was speaking incoherently when questioned by police.

The bomb squad were immediately sent to inspect the vehicle to determine whether there were any explosives inside.

One eyewitness at the scene Claude Ribbe said he believed the driver took advantage of the fact that a convoy of three cars had just passed through the gates.

“The car advanced around 100 metres in the first courtyrard in the direction of the Cour de’honneur, before being stopped.

“That’s probably the reason why the police opened fire.”

Since the attacks of November 13th France and particularly its capital city have been on a heightened state of terror alert.

It is believed the driver was trying to reach the central “la cour d'honeur” courtyard where the memorial took place.