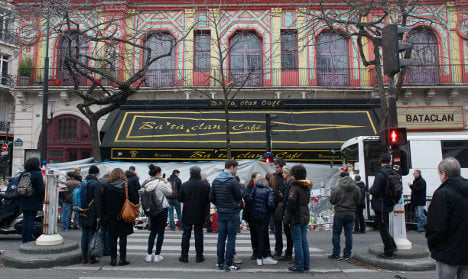 The Bataclan concert hall remains closed in Paris, a month after the attacks. Photo: AFP
Talk of a possible suicide bombing at the Bataclan concert hall in Paris cropped up at least five years ago, Le Canard Enchaîné newspaper reported.
In early 2009, when Islamist terrorists bombed a bar in Egypt's Cairo that was full of French students, killing one and injuring dozens.
A French woman who was arrested in connection with the attack reportedly told authorities that her friend was planning to “blow up the Bataclan”.
The woman had noted in her diary that the Bataclan's “boss is a Jew who is financing the Israeli army”.
The hall, at the time, hosted events evenings in support of the Jewish community, the paper noted.

The front page of Wednesday's Canard. “Terror attack threats known for more than five years”
A judicial inquiry was launched in July 2010 into the terror threat, but the case was dismissed over a lack of evidence some two years later.
But the case was never brought to the attention of the Bataclan team, reported the paper, and no extra surveillance measures were put into place.
Five years later, three armed terrorists wearing explosives marched into the hall and killed 90 concert goers.
The paper noted that there were several connections between the terror threat of 2009 and last month's attacks.
Firstly, the French woman's friend was Farouk Ben Abbes, who is known to have connections with Fabien Clain, the French jihadist who made the audio recording claiming the November Paris attacks for Isis.
Secondly, the presiding judge for both 2009 threats and the 2015 attack is the same man, Christophe Teissier.