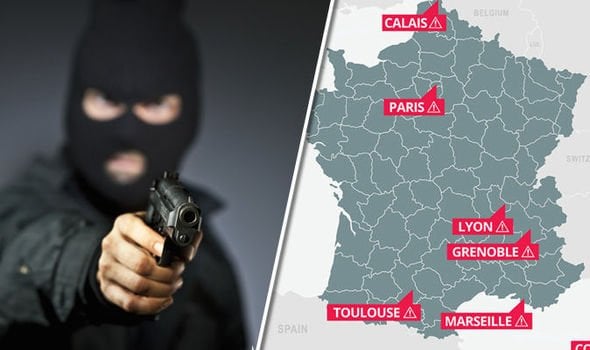 "The terror threat REVEALED." Photo: The Daily Express
Is it safe to travel to France?
That was the question that was posed by the UK tabloid The Daily Express in an article that has rubbed many people up the wrong way in France.
It's not that the question itself isn't a fair one given the ongoing terror threat and fears of more attacks, but more how the paper decided to list locations around France, suggesting they best be avoided if readers wanted to be safe.
The paper collected the locations of France's terror attacks from the past few years, as well as the areas where counter-terror police have carried out raids, putting the information together in a map of what it called France's “terror spots” (see below).
It was accompanied by a picture of a man with a balaclava pointing a gun in the direction of the camera, a choice of image that riled many.
These included Paris, Toulouse, Lyon, Grenoble, Marseille, Calais and even the beautiful island of Corsica.
The article has been set upon by the French media and commentors alike, as the wounds are still healing from November's terror attacks that saw 130 killed in Paris and concerns are growing about the huge detrimental impact on the tourism economy.
It's the type of scaremongering article the country could do without as it desperately tries to return to normal after the devastation of November 13th. Many questioned how a city like Toulouse could be currently listed as a “terror spot” when nearly four years have passed since a self-proclaimed Islamist fanatic killed seven people there including three Jewish children.
Others lambasted the inclusion of Corsica on the list, with the paper admitting that there is no Isis threat on the southern island.
It warned its readers instead about the members of the National Liberation Front of Corsica, a group fighting for independence from France which is understood to be responsible for several explosions on the island. “The terror spots in France”, writes The Daily Express.
The article was reminiscent of a January story by Fox News that listed the “no-go zones” in Paris following the terrorist attacks in January, a set of areas that the channel declared off limits for non Muslims.
And, just as with the Fox News story, the French have responded to The Daily Express with ridicule and a certain amount of anger.
“So, if the British want to travel safely around France, they should avoid Paris, Toulouse, Lyon, Grenoble, Marseille, Calais and Corsica, according to the Daily Express,” wrote Europe 1.
“This is not a (bad) joke,” wrote 20 Minutes.
“There are seven areas now too dangerous for the roast beefs,” wrote Le Bon Bon in a scathing piece, referring to the British population in a similar kind of insult to calling the French “frogs”.
“Be careful guys,” it added in English.
Those on social media were even less forgiving.

Several sent “shame on you” messages to the paper via Twitter, while others called the story “ridiculous”. One French Twitter user said it was the “British joke of the day” to add Toulouse to a no-go list.

Joy: that feeling when you know Daily Express readers won't be coming to visit the foreign city you now live in. https://t.co/lhe2y3CRM2

One irate French person tweeted: “We are French and we can guarantee that this map is ridiculous”.
Another told the newspaper: “You'd have been better off sending journalists to these towns first rather than writing this crap, only to realize you're wrong.”
A survey embedded on the British site showed that 8 percent of respondents said they “wouldn't feel safe” visiting France at all. Some 26 percent said they'd feel nervous about visiting.
Meanwhile, 66 percent of the 1,500 voters said they thought it was safe.
So – the million dollar question – are the areas safe?
Well, according to the French embassy to the UK, of course they are.
“The public authorities and tourism professionals have made safety a national priority,” the embassy said, adding that all tourist attractions are open.
In fact, many would argue that there's never been a better time to visit the capital, considering that so many tourists have changed their plans in the wake of the November attacks.
Indeed, the waiting times at big attractions like museums in Paris have rarely been so short, the hotels rarely so vacant, and the flights rarely so cheap – especially at this time of year..
Even the French prime minister has said it's time for tourists to come to France.

But a word of warning – if you're thinking about visiting the French capital, be sure to avoid the ten real “no-go zones” of Paris.