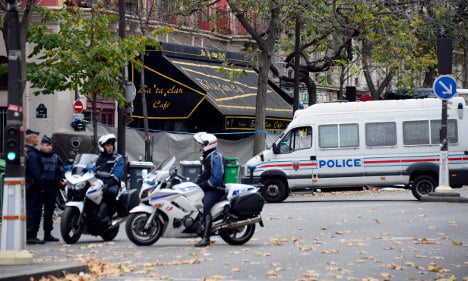 Police at the Bataclan the day after the attacks. Photo: AFP
The officer told France Info radio about the horror he faced after arriving at the Bataclan, where terrorists were slaughtering a concert hall full of young concert-goers.
He told the station that he was on the way to the Stade de France stadium after reports of explosions when he was redirected to the 10th and 11th arrondissements to respond to reports of shootings.
On the way, the officer and his colleague noticed panic-stricken people fleeing the Bataclan concert hall and they both headed inside.
The officer, who is a department head at the Paris anti-crime brigade (BAC), said he was met inside by “bewildering silence… and the horrific site of a hundred bodies piled on top of one and other.”
The officers were not part of the elite force and were only wearing light bullet proof vests and armed with handguns. Despite this, they didn't hesitate to take action after seeing one of the gunmen firing indiscriminately into the crowd from the stage.
The policeman told the channel about his encounter with the gunman, who was later identified as Foued Mohamed-Aggad.
“He was very calm,” said the officer, whose identity has been protected.
“Given the carnage, there was no doubt about what we had to do. We opened fire straight away. We kept shooting until he fell to the floor.”
As the terrorist fell to the ground, an explosion went off, letting the officers know that the killer was armed with a suicide bomb as well as an automatic weapon.
The officers realized that the danger wasn't over after hearing further explosives from elsewhere in the building soon after.
“We decided we could not leave the scene – we could not leave these people,” the officer said.
“I was ready to die with my colleague that night. I phoned my girlfriend to say goodbye.”
Soon after, elite police forces arrived on the scene and took over, getting into a shootout with the other two gunmen hours later after a drawn out hostage negotiation.
The two other terrorist gunmen died at the scene, but no police officer suffered serious injuries.
A total of 90 people were killed at the Bataclan, with forty other people killed around Paris in separate attacks around the same time.