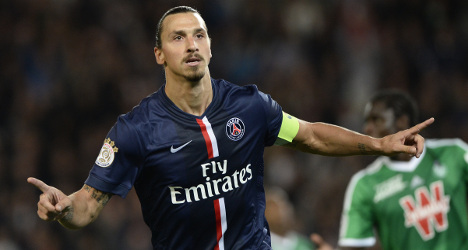 They must be sick of the sight of each other by now.

Paris Saint-Germain will once again come up against Chelsea in the Champions League after the rivals were once again paired with other in Monday's draw for the last sixteen.

The French champions knocked out Chelsea at the same stage of last year's competition thanks to a late goal from Thiago Silva.

That win was revenge for the previous year when Chelsea dumped the French club out of the competition at the quarter final stage.

In last year's clash PSG overcame the sending off of their talisman Zlatan Ibrahimovic in the first half of the return leg.

The giant Swede accused the Chelsea players of acting like “babies”.

Last year's clash was marred by the racist attack on a Parisian by Chelsea fans on the Paris Metro.

The incident saw a black man repeatedly pushed off the Metro carriage by Chelsea fans who then began singing, “We're racist and that's the way we like it”.

The behaviour was condemned by Chelsea and led to the banning of several fans.

The pick of the other ties sees Arsenal paired with Barcelona while Bayern Munich will have to take on Juventus.