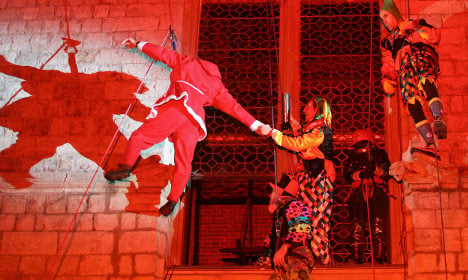 A man dressed as Santa abseils down the Belfry in Douai. File Photo: AFP

“He was preparing for Christmas. Every year, Santa Claus descends from the belfry in Douai,” a representative for the local fire and rescue team said.

The event was due to take place on December 20th.

After descending about one third of the way down the bell tower in the northern French town of Douai, the young man fell some 30 metres (100 feet) in front of about 20 members of the club he trained with and was declared dead on the spot, an AFP correspondent reported.

An investigation will determine if the equipment used in the descent was defective, the local department for public safety said.

The type of equipment used by the team is normally designed to prevent falls.

An autopsy will reveal if the young man suffered from a sudden sickness or fainting spell that might have led to the fatal fall.