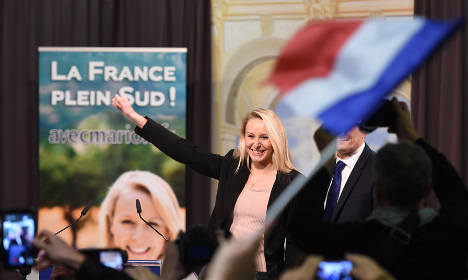 “Defeat! What defeat?” That was the reaction from the National Front after Sunday's regional elections.

Much of France woke up on Monday relieved by the fact the National Front had been beaten in the second round of France’s regional elections meaning the far-right failed to take control of any region.

After being ahead in six out of the 13 regions after the first round and scoring more than 40 percent of the vote in the northern Pas-de-Calais-Picardie and the southern Provence-Alpes-Côte-d’Azur (PACA), Marine Le Pen and co would have been disappointed on Sunday night.

But the fact they once again failed to turn a strong first round showing into second round victories, just as in March’s smaller départemental elections, should hardly be seen as a crushing loss for the National Front.

The regionals, like the local, European and departmental elections and the 2012 presidential vote marked yet another significant step forward for the far right.

In Sunday’s second round Marine Le Pen’s party picked up 6.8 million French votes, a record high, after beating the 6.4 million she picked up in the first round of the 2012 presidential election and nearly 800,000 more than last week's first round.

And compare the fact that in the second round of the previous regional elections in 2010 the National Front picked up just nine percent of the vote, compared to 28 percent this around.

'Relieved. But…': the front page headline on left leaning Libération after French far right held back in regionals pic.twitter.com/OcKtmV4ixx

Only in the regions of Ile-de-France, Brittany, and Corsica did the National Front fail to win at least 20 percent of the vote.

In her speech on Sunday night Marine Le Pen made no mention of any defeat.

On the contrary she came out fighting saying “nothing would stop us now” and talked of the “inexorable rise” of her party.

She pointed out that her party would be the main opposition party on most regional councils after tripling the number of seats they had picked up in 2010.

Marion Maréchal Le Pen, Marine’s niece, also set a defiant tone after she was beaten into second place in PACA by the conservative candidate Christian Estrosi.

“There are some victories that shame the winners,” she said, referring to the fact that Estrosi had had to rely on Socialist votes to get past the post.

The regional elections showed without doubt that Marine Le Pen is winning over new voters.

Women, young people, professionals, students, unemployed, businessmen and former left wing voters all turned out in force to vote for Le Pen’s party and significantly they turned out in all regions across France, not just their strongholds in the far north and Provence.

The old notion that the National Front is just a party made up of racists and anti-Semites that attracts only protest votes has been well and truly put to bed.

While Marine Le Pen would have dearly loved to have become president of the northern Nord-Pas-de-Calais-Picardie region to prove the doubters she is capable of governing, she has still built a sound platform to launch a bid for the Elysée palace in the 2017 presidential election.

If she wins 6.8 million votes or more in the first round, she will surely knock out a mainstream candidate, perhaps even the president François Hollande or her old enemy Nicolas Sarkozy.

While she is still unlikely to become president she has shown that she can no longer be considered a fringe politician and her party is here to stay.

The 2017 parliamentary elections could yet provide the outright victories she craves.

The downbeat victory speeches from the centre right and the left on Sunday night highlighted the fact they know Marine Le Pen will be not be going away anytime soon.

The fact that the mainstream parties once again had to gang up to keep her out of power will only help feed her narrative that “the system” is against her party and there is no real difference between the French political elite on the left and the right.

“I really don't think Le Pen will be disappointed not to have won. The result confirms everything she has been saying about a conspiracy against her party.”

As the French political scientist Gaël Brustier points out, perhaps Le Pen’s biggest victory in recent weeks was not at the polling station.

The fact that in the light of the November 13th terrorist attacks the French president has adopted some of the ideas she has been campaigning for, such as closing radical mosques and stripping extremists of their French nationality, shows how many of her policies are no longer considered extreme.

While they may not have got the victories they craved, the National Front is stronger than it has ever been.