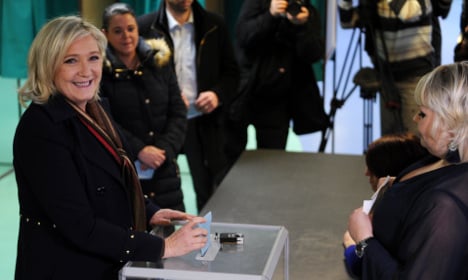 We are going to close down the live blog, but just to recap what happened on Sunday night, the main point is clearly the fact that Marine Le Pen and her National Front party failed to win a single region.

This wouldn't have been big news five years ago, but after Marine Le Pen's party scored 28 percent of the vote in the first round –  a record score for the far-right party, the National Front were expected to win at least one region.

In the end they were roundly beaten, thanks in the main to the fact that the Socialist Party pulled out their candidates in two regions – Nord-Pas-de-Calais-Picardie and Provence-Alpes-Côte-d'Azur – to block the National Front from winning.

That tactic clearly worked and the rise in turn out (up from 49 percent to 59 percent) also spelled trouble for the National Front.

Marine Le Pen was clearly not happy and reacted with a mixture of frustration and defiance. You can read more of what she had to say here.

The night was not too bad for the Socialists who were expected to pick up five regions although they lost the Ile-de-France region including Paris to the Republicans.

Nicolas Sarkozy's party was expected to pick up seven regions including Paris and Normandy.

The estimated vote counts were as follows:

Socialists and allies on the left: 5.1 millions voters, so 27 percent of the vote

National Front: 5.5 million voters, so 30 percent of the vote

Les Republicains and allies on the right: 7.1 million votes, so around 39 percent of the vote.

Valérie Pecresse, the candidate from the conservative Les Republicans party has beaten her Socialist rival Cluade Bartelone in Paris according to initial results.

Those initial estimates suggest Pécresse has picked up 44 percent of the vote compared to Bartelone's 42 percent.

That represents a huge blow to the Socialist Party.

Marine Le Pen, leader of France's far-right National Front, was defiant on Sunday despite her party failing to win a single region in elections.

“Nothing can stop us now,” she said. “By tripling our number of councillors, we will be the main opposition force in most of the regions of France.”

Unconfirmed reports in Paris suggest the Right has taken control of the French capital, which is part of the Ile-de-France region. We'll have to wait a little longer for the official estimates.

That was the bold statement made by Marine Le Pen after the first round of the regional elections, when the National Front received 28 percent of the vote.

However the second round on Sunday, with the turn-out almost 60 percent the National Front were beaten into third place, behind Les Republicans and the Socialist Party.

He also heralded the defeat of the National Front but urged his government to act against the poverty in the country.

France: Result of the winning party in second round of #electionsregionales. No region for #LePen. #Regionales2015 pic.twitter.com/8YYHIyvd4D

While the National Front may have been beaten on Sunday and failed to win any region in France, it obviously won't be the last we hear of Marine Le Pen and co.

She will begin in earnest to campaign for the 2017 presidential elections, where her growth in support in recent years is expected to carry her through to the second round.

The National Front has also won a huge number of seats on regional councils with Le Pen promising they will be the main opposition.

Ex-president Nicolas Sarkozy who heads the centre-right Republicans party said they must listen to those who voted for the far right.

It's still not clear who has won in the French capital and the region of ile-de-France where most voting stations closed at 8pm, compared to 6pm in the regions, but here's the results that we know so far:

French PM Manuel Valls has been speaking at his HQ in Matignon and warns that despite the defeat of the National Front, “the threat from the far right has not been beaten”.

Valls also admitted the government needed to give French people a desire to vote “for rather than vote against” in reference to the Socialist Party pulling candidates out just to block the National Front.

Marine Le Pen says France is now in a two party system between “those who favour globalisation and patriots”.

Marine Le Pen has just been speaking live. As expected she came out fighting a speech that earlier this week she would have understandably thought would have been a victory speech.

Le Pen thanked the six million voters who backed the National Front, she also celebrated having succeeded in wiping out the Socialist Party in the northern and southern regions where they pulled their candidates out.

While the centre-right Republicans and their allies topped the vote in the second round, the Socialist party did manage to keep control of several regions despite being pretty unpopular in the polls.

François Hollande's party won in Brittany, Aquitaine in the south west, Midi-Pyrenees and the Centre.

Xavier Bertrand who beat Marine Le Pen in the north has just given his victory speech to chants of “Xavier, Xavier” from his supporters.

He said the win belonged to the people of Nord-Pas-de-Calais-Picardie.

Bertrand also thanked Socialist party voters who voted for him in the second round to keep Le Pen out.

20:03 – Disappointment for the National Front

According to initial estimates the National Front have failed to win control of any of France's 13 regions, despite being ahead in six after last week's first round vote.

In the end Marine Le Pen was well beaten in the northern region of Nord-Pas-de-Calais, where Xavier Bertrand picked up 57 percent of the vote to Le Pen's 42 percent.

That's according to the provisional results.

That's the allegation of Marine Le Pen after the Socialist party decided to pull their candidates out just to block her party from winning in the northern Nord-Pas-de-Calais region and PACA in the south.

Some would say tactical voting – others would agree that French voters are not being represented.

Does Le Pen have a point? We can expect to hear more anger from Le Pen on this point if the National Front fail to win any regions.

19:50 – Will the centre right take control of Ile-de-France Paris region?

While the National Front aren't seen as having any chance to take control of the capital, there is still a bitter battle between Valérie Pécresse of the centre right Republicans and the Socialist party's Claude Bartelone.

And after 8pm, well, then the reaction begins.

Marion Marechal-Le Pen's HQ for the night is the Florida Palace. Will she be celebrating?

If you are wondering what all the fuss is about then this article sheds a little light on what the National Front could do if they win power in and of France's 13 regions.

And what if the far-right wins control of French regions? Marine and her niece Marion Marechal-Le Pen had Cheshire cat like smiles after the first round last week, when they romped to above 40 percent of the vote. However this week polls suggest they could lose thanks to Socialist party pulling out their candidates and calling on their voters to back the centre-right Republicans party. …France's regional elections are incredibly interesting. Without Marine Le Pen's party it's fair to say they would hardly get any of the attention from around the world.

This year's elections are also significant thanks to the Paris terror attacks, which are said to have boosted the National Front. Not that the party was particular in need of a boost. It has been winning over voters since Marine Le Pen scored 18 percent of the vote in the first round of 2012 presidential election.

What’s at stake is the control of France’s new so-called super regions that were recently redrawn to cut the number for 22 regions down to 13.

After the first round Marine Le Pen’s National Front led in six out of the 13, which caused one heck of a shock in France and around Europe.

The problem for Le Pen is that in France there are two rounds of voting and her party generally doesn’t do that well in the second round.

Even though the National Front scored more than 40 percent of the vote in Nord-Pas-de-Calais-Picardie and Provence-Alpes-Côte-d’Azur, polls suggested they would still lose.

That's due to the Socialist Party pulling out their candidates and telling their supporters to voter for bitter rivals in Les Republicans.

But that doesn’t mean the National Front are just going to go away of course.

With the official results not due until 8pm French time, the main news to report is that turn out for the second round is up by almost ten percent on last Sunday's first round vote. The abstention rate is estimated around 41.5 percent where as it was almost 50 percent last week.

What does that mean? Most political analysts agree that a higher turn out generally spells bad news for the National Front's chances of winning a region.