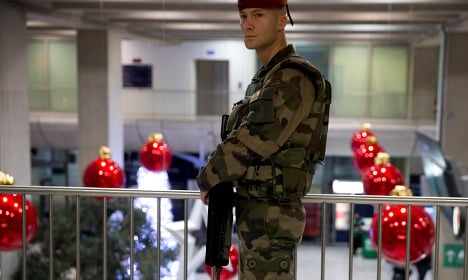 A French soldier patrols at the the Roissy-Charles-de-Gaulle airport. Photo: Kenzo Tribouillard/AFP

So-called red badges are issued to people employed in the secure zone of Roissy-Charles de Gaulle and Orly airports, working for instance as baggage handlers, aircraft cleaners and suppliers.

Augustin de Romanet, chief executive officer of Aeroports de Paris (ADP), said the prefecture — the representative of the state — which issues the badges had carried out a screening after the attacks on Paris, in which 130 people were killed and 350 injured.

“Nearly 70 red badges were withdrawn after the attacks, mainly for cases of radicalisation,” he said in an interview with French media.

He said around 85,000 people had secure-zone clearance in the two airports, most of them working for airlines or for “several hundred” sub-contractors.

“To be issued with a red badge, you have to be cleared by police, and if you work for a company that carries out security checks of in-flight luggage, you need three police checks,” De Romanet said.

He added that deployment of military personnel at the two airports had been boosted by half following the attacks, and passport officers were checking the IDs of all people leaving the country, “including flights in the Schengen zone,” the European Union's border-free area.

“I hope we will return to a more normal level of traffic. It has been a heavy blow,” he added.